Newcomer banishes memories of Getz, but does it push firm to front of the supermini field? 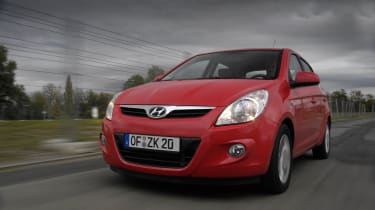 The i20 is a big improvement over the Getz in every way. But the opposition hasn’t been sitting on its hands, either, and although the Hyundai is a strong contender, its ride and 1.4-litre diesel disappoint in the face of excellent opposition. With this engine it is nowhere near threatening the class leaders, although it does represent superb value for money. And in these troubled times, maybe that isn’t such a bad selling point.

Hitting the big time in small cars has become the holy grail for motor makers desperate to survive our current cash-strapped climate.

Hyundai didn’t manage that with its pedestrian Getz. Now it’s hoping that car’s successor, the i20, will be able to take the fight to big guns such as the Ford Fiesta, Vauxhall Corsa and Volkswagen Polo.

Video: watch CarBuyer's video review of the Hyundai i20

The i20 is longer, lower and wider than the Getz, so while its predecessor was instantly forgettable, the newcomer is rather stylish. There’s neat detailing around the front and pronounced lines that run the length of the doors. In terms of looks, the i20 is not unlike a cross between a Mazda 2 and the Corsa.

The five-door that we drove will be in showrooms in January, while the three-door – which is simply shorter, rather than a different shape – comes four months later. Inside, Hyundai has played it safe. The design is functional and clear, and looks stylish without resorting to gimmicks. And as with the exterior, it’s all very well put together with tight, accurate lines around panels.

Boot space is a handy 295 litres, which is bigger than either the Corsa or new Fiesta. And while the rear seats don’t perform the one-touch folding tricks of the Honda Jazz, they do split and fold flat, although the seat backs are slightly higher than the boot floor. Put them back up, and there’s space for a six-footer to sit behind another six-footer. Headroom is generous for rear seat passengers, as is foot space, while legroom is the only constraint.

Where the i20 really scores is with standard kit. Even the entry-level Classic gets air-con, CD player, MP3 socket and electric windows. Owners of the i20 will also get six airbags as standard and active head restraints which move forwards to cushion against whiplash injuries. These are measures Hyundai believes will lead to the car winning five stars in Euro NCAP’s safety tests. The firm estimates the i20 will be priced around £1,000 less than the equivalent Fiesta, so the range should start at about £8,000.

The Korean firm is further appealing to our rediscovered thriftiness with the engines on offer. The range includes the 1.2-litre petrol used in the i10, plus the i30’s 1.4-litre unit. But the headline grabbers will be the 75bhp and 90bhp 1.4-litre diesels that both return 64.2mpg and 116g/km of CO2.

The 90bhp oil-burner is a relaxed cruiser, although you have to work it surprisingly hard for any turn of speed. The i20’s new chassis is a big step forward over the lacklustre Getz. It corners with composure, and the electric power-steering is responsive and accurate.

The downside is a ride that is overly firm, with small lumps in the road feeling larger and more intrusive than they should to occupants. It lets down a solid effort by Hyundai.