We love the new Hyundai Kona EV, but the diesel-powered version is less impressive 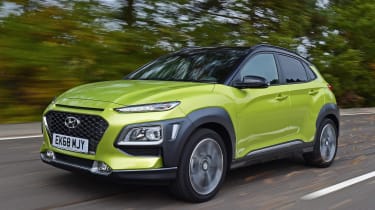 The Hyundai Kona competes in a crowded class, and when it comes to driving and ownership, it's pretty much completely middle of the road. Urban fuel economy aside, there’s little to fault about this diesel example, so if the Kona’s quirky styling appeals, then this engine is a perfectly pleasing option. However, our class favourite, the Citroen C3 Aircross, is cheaper to buy if you’re happy to do without some fancy extras.

The Hyundai Kona has grabbed plenty of our attention recently, but that’s mostly in its all-electric form. One of the first affordable EVs to offer a real world range that’ll cover the average commuter’s entire week (and then some) without a charge, the Kona EV shows all the promise of becoming a sales hit.

But it’s still fair to say that an electric car isn’t quite for everyone yet. Drivers who cover very high mileages and who appreciate the convenience of a 60-second refill, for example, have yet to be convinced. So, with that in mind, is this diesel version of the Kona, which returns 67.3mpg in official tests, still relevant?

The Kona diesel uses a 1.6-litre turbocharged unit. It’s available in two outputs: 134bhp, or the version driven here which has 113bhp and 280Nm of torque. That puts this model slightly behind the 118bhp and 300Nm offered by our favourite car in the small crossover class, the Citroen C3 Aircross. 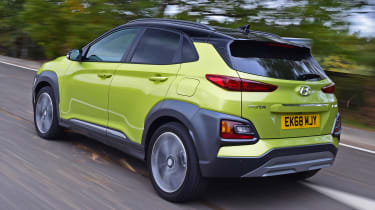 So how does it feel on the road? Well, although there’s a little clatter from the engine, it’s still more refined than many rivals. The power delivery is smooth, but it can feel a little sluggish off the mark - something not helped by the fact that the noise at higher revs warns you off regular hard acceleration.

At a more relaxed pace, the Kona is perfectly pleasant. The steering is slightly heavier than the Citroen’s, but it’s still a doddle to use around town. The ride is merely okay - it’s a little smoother than the SEAT Arona, but some sharper bumps can transmit crashy noises into the cabin.

It’s fuel consumption that matters in a car like this, and in this regard the Hyundai Kona diesel is a bit of a mixed bag. On a long cruise, fuel consumption is fairly impressive - it’s reasonable to expect it to return mid-sixties in mpg at 70mph.

Around town, however, it’s a different story. Despite a fairly keen start/stop system - which cuts the engine at around 3mph to let you creep a few extra metres combustion free - in typical rush hour traffic, it struggled to hit 30mpg. At that figure, the Hyundai’s 50-litre fuel tank would get around 330 miles - or to put it another way, roughly the same as the faster, cleaner, Kona EV. 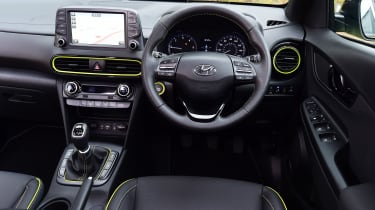 While the diesel Kona is cheaper to buy than the electric equivalent, one look at the finances and things become a little more shakey compared to our favourite compact combustion crossover, the Citroen C3 Aircross. On a four-year deal with a 10% deposit (with Hyundai’s current £1,250 deposit contribution on top of that), the Kona will set you back around £350 per month. Compare that to the C3 and, on equivalent terms, the Citroen costs around £70 per month less.

Of course, the C3 isn’t as well-equipped as the Kona and not much is in this class. The Hyundai has a brilliant touchscreen infotainment system, and a full leather interior featuring heated and cooled front seats. You just have to ask yourself whether the extra toys are worth the outlay.