The new Hyundai Santa Fe SUV will be priced from £33,425, with sales set to begin in the UK in September 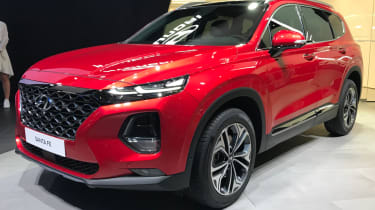 Hyundai has confirmed official prices and specs for its all-new Santa Fe SUV. The Skoda Kodiaq and Nissan X-Trail rival will start from £33,425 when sales begin in September

The Premium model costs from £36,995, and adds 18-inch wheels, LED headlights, keyless entry, leather seats (which adjust electrically in the front), an electric tailgate and an uprated eight-inch touchscreen with satellite navigation and a Krell sound system. 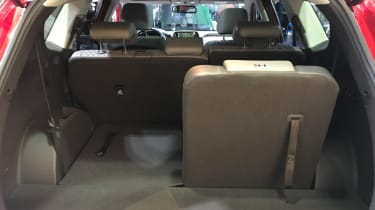 The Premium SE sits at the top of the range, and its wheels grow an inch larger than the Premium. Also included is a panoramic sunroof, ventilated front seats and a driver’s head-up display. It’s offered with an automatic gearbox only and starts from £41,795.

As before, the only engine offered in the UK will be a 2.2-litre diesel. It’s an updated version of the old unit, gaining extra filters to reduce emissions while maintaining the same 197bhp and 440nm of torque. Gearbox options give the choice between a six-speed manual and a new eight-speed automatic. Hyundai claims the Santa Fe will achieve 47.1mpg on the combined cycle, regardless of the gearbox choice or driven wheels.

The Santa Fe’s looks are inspired by the smaller Kona SUV. At the front it gets a large hexagonal grille, slim LED running lights, and a chunky front bumper with an integrated number plate. Alongside the overemphasised wheel arches, it helps give the Santa Fe an aggressive look.

Around the back, the car's rear end evolves with a new bumper, a new tailgate and fresh tail light clusters. A roof spoiler injects a bit of sporting appeal.

Hyundai promises that the new Santa Fe will boast class leading roominess in the seven-seat SUV segment, and the new car is both longer and wider than the outgoing model, sizing up at 4,470mm long and 1,890mm wide. The result is an extra 38mm of legroom for second row passengers, who sit 18mm higher than before. Those sat right in the back, benefit from an extra 22mm of headroom.

Boot space has improved, too: the old seven-seat Santa Fe offered a 516-litre volume in five-seat mode which expanded to 1,615 with the rear seats folded, and the new version expands both of those numbers to 547 and 1,625 litres. 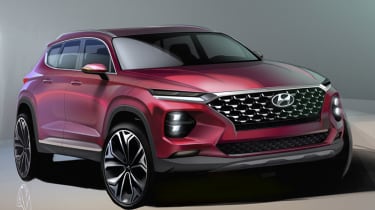 Inside, the dashboard has been overhauled with a floating tablet-style infotainment system as found in many other recent Hyundais, new switchgear and vents, a new steering wheel and a fresh instrument cluster with a digital display.

When it comes to safety and driver assistance tech, the Santa Fe builds on Hyundai's current suite of SmartSense assistance features by introducing rear cross traffic alert, plus a new feature called Safety Exit Assist, which temporarily locks the doors when it senses a vehicle approaching from behind and removes the chance of a passenger opening the door into the path of a passing car.

New Rear Occupant Alert warns the driver that passengers are still in the back before locking and leaving the vehicle - a feature developed with children in mind. Elsewhere, the Santa Fe boasts a forward collision warning system with pedestrian detection and automatic emergency braking, lane keep assist that works at speeds up to 37mph and blind spot monitoring.

Hyundai says it has made an effort to make the Santa Fe more comfortable, and has developed the suspension to deliver a smoother ride than before. The set-up itself has been made stiffer, but boasts a longer travel length. A self-leveling system which keeps the ride height constant regardless of load and weight in the car is on the options list.

Though unconfirmed for now, it’s possible that hybrid technology could appear further down the line, too. Hyundai will introduce 31 new low emissions models across the Hyundai and Kia line-up by 2020, with plans to expand its hybrid line-up to include SUVs and large vehicles.

Read our full review of the new Hyundai Santa Fe… 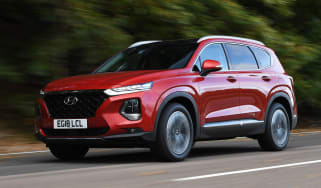