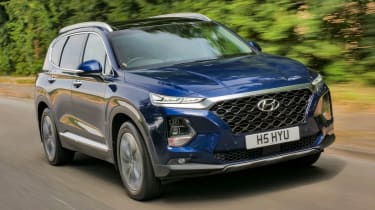 There is no denying the latest Hyundai Santa Fe is a talented family car. It offers space, comfort and kit in spades, as well as an accomplished driving experience and impressive refinement. However, no matter how much standard kit it offers, top-spec models like ours are expensive – even on a monthly PCP finance deal.

We first drove the all-new Hyundai Santa Fe on European roads back in July. Our verdict was overwhelmingly positive, but the car’s high list price remained an unavoidable sticking point. Now that we’ve got the car back in the UK – complete with an early representative finance example – can the Korean firm’s flagship topple the all-conquering Skoda Kodiaq?

The first thing that strikes you is how vast the Santa Fe feels inside; space up front is generous, with loads of adjustment in the seats, steering wheel and mirrors. The middle row is equally capacious, and the completely flat floor makes it easy to fit three across the back.

Things only really come undone as you clamber into the third row, which is still only suitable for small children. Hyundai says the boot is bigger than before, however, with enough room for a few soft bags even with all seven seats in place. 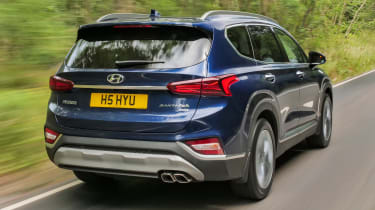 The handy touches don’t end there, either. The glovebox is big and cubby holes are plentiful, while in the back you’ll find two USB slots and a 12V power outlet for larger devices. Interior quality is really good, and should be more than capable of standing up to the rigours of family life.

On the move, the Santa Fe’s composure is impressive. Even on broken and battered British roads, the big SUV remains almost admirably flat – without ever really succumbing to rough or rippled tarmac. Body roll is kept in check, and there’s a decent level of grip.

The clever drive mode selector helps to effectively distribute torque; in Eco the car is powered via the front wheels only, while in Sport the four-wheel drive system splits drive evenly across the two axles. The steering is on the heavy side in all settings, but doesn’t offer much feel.

Elsewhere, the auto gearbox is smooth and quick, and while slow rolling starts still catch it out, the set-up suits the car’s character. The 2.2-litre diesel engine is refined in the most part as well, developing more than enough grunt for everyday needs.

You won’t be left wanting for kit, either. SE cars (from £33,425) come with 17-inch wheels and adaptive cruise control, as well as a touchscreen infotainment system with Android Auto and Apple CarPlay. Premium cars boast desirable extras like LED lights and keyless entry, while Premium SE models like ours get luxuries like ventilated memory seats, a heads-up display and extra safety kit. 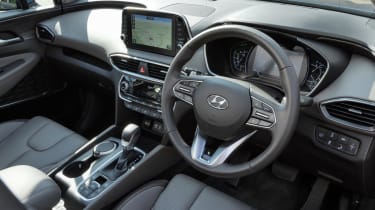 But as we mentioned in our first review, the new Santa Fe needs to stack up financially in order to beat our current class favourite. On list price alone, a top-spec Hyundai is £6,255 more than the equivalent Kodiaq, so residual values and monthly deals could make or break an otherwise excellent all-rounder.

Unfortunately, early indicative finance examples suggest this range-topping Santa Fe Premium SE will be more than £200 per month more than the most expensive Skoda on a like-for-like PCP. With a comparable deposit, the Hyundai will set you back roughly £675 a month, while the better-value Kodiaq is nearer £470 a month. Hyundai claims buyers will have greater equity to play with when the time comes to trade in their car later down the line, however.

Running costs are on par, and while the Santa Fe will cost company car users slightly more in Benefit in Kind tax, fuel economy isn’t wildly off the mark. A more fuel-efficient two-wheel drive model is available, mind you.