SUV is better than ever with fresh styling and a new, more efficient turbodiesel engine 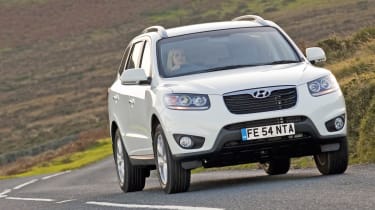 Here's further proof that Hyundai’s range is going from strength to strength. Indeed, this new version is the best model in the Santa Fe line-up. The turbodiesel engine takes most of the credit, as it’s punchy, efficient and remarkably economical. There are still some niggles to iron out, but with a convincing driving experience on and off the road, plus an amazing amount of space and kit, this is great-value family transport.

We're huge fans of Hyundai’s Santa Fe! The big off-roader is a previous winner of the Best Recreational 4x4 category in Auto Express’s New Car Awards. And it’s proved a hit among buyers, with the firm selling 10,000 models since the current version arrived in 2006.

Now, it’s had a major overhaul, offering a new, more powerful and efficient diesel engine, plus updates inside and out. With prices from £21,495, it’s still playing the value card, and the option of five or seven seats ensures the car has plenty of family appeal. So, do these changes keep the Santa Fe at the top of its class?

At first glance, it doesn’t appear much different from the model it replaces. Look closer, though, and you’ll spot fresh headlights, a chrome-edged three-bar grille and revised front bumper. At the back are new tail-lamps and exhaust pipes. As a result, the SUV is chunky and handsome, and has plenty of presence without being overly aggressive.

While the interior still isn’t up to premium-brand levels, the cheap-looking fake wood finish of the previous car has been replaced by carbon black trim.

Hyundai still has work to do on the downmarket digital displays, but touches such as an aux/USB connection with full iPod control are welcome. There’s lots of space for passengers and luggage, plus the option of a third row of seats for an extra £750.

On the move, there’s much to enjoy about this new Santa Fe, mainly due to its mighty diesel engine. Linked to a six-speed auto box, it produces 194bhp and a storming 437Nm of torque. Ignore Hyundai’s cautious 10.2-second 0-62mph time – it feels much faster.

The SUV is really responsive, with masses of overtaking urge. And it’s a better tow car than before, capable of pulling 300kg more, at 2,500kg.

Better still, this thrust doesn’t have a big impact on running costs. Thanks to a clever alternator that disengages when not in use, the Santa Fe returns 38.2mpg combined and emits 197g/km of CO2.

Add a smooth engine note, great high-speed refinement and slick shifts, and the result is a big thumbs-up. The good news continues with the rest of the driving experience.

The steering is well weighted and accurate and the Santa Fe feels agile for its size. While the tough suspension can be jiggly over bumps, it’s still comfortable, and the payoff is real ability when the going gets rough. This is a capable SUV that’s now better than ever.

Rival: Nissan X-Trailanother brilliant 4x4 that can mix family duties with those of a real mud-plugger. The X-Trail is solidly built, generously equipped and delivers car-like performance – so it’s well worth a look.