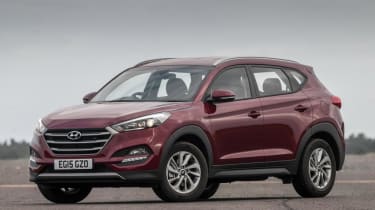 It’s easy to see why the Tucson is one of Hyundai’s best-selling cars in the UK and across Europe. It looks smart and is well equipped, comes with a decent range of engines and transmissions, and is widely available second-hand. We’d avoid the underpowered entry-level 1.6 petrol, but the diesels and turbocharged petrol engine are more accomplished. If you’re buying to tow, seek out a four-wheel-drive model and find something with plenty of toys; high-spec Tucsons are common. Just check everything works; while reliability isn’t a huge issue, it can be more of a problem on the Hyundai than you might expect.

When Hyundai arrived in the UK in 1982 with the Pony, it was easy to make jokes about how lame the product was. But for those on a budget wanting no-nonsense transport, it was just the job.

The company’s first SUV (the 2001 Santa Fe) was just as uninspiring, but again, the car gained a following with buyers who put value ahead of image.

That was still true to an extent with the original Tucson of 2009. However, by the time the second-generation car appeared in 2015, customers could have it all: top value, sharp looks, decent engines, the latest hi-tech kit and a good drive, too. 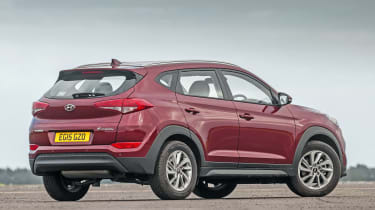 The Mk2 Tucson replaced the ix35 in September 2015. Buyers could choose naturally aspirated or turbocharged 1.6-litre petrol engines, along with 1.7 or 2.0-litre diesel powerplants.

While the 1.7 came in only 115bhp manual front-wheel-drive form, the 2.0 was offered with 135bhp or 175bhp and in front or four-wheel drive with manual or automatic transmissions.

From March 2016, the 1.7 CRDi got a dual-clutch auto option, while a facelift earlier this year means updated Tucsons are now in dealers. These have a new dash, a revised nose and tail, fresh alloy wheel designs, improved infotainment and extra driver assistance systems. A 1.6 CRDi engine replaces the 1.7 CRDi and a mild hybrid also joins the range.

All Tucsons are well equipped. Even the entry-level S has 16-inch alloys, air-con, electric windows front and rear, DAB and a multifunction steering wheel. 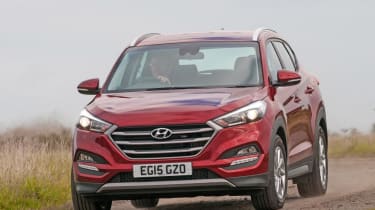 Move up to the SE and you get 17-inch wheels, climate control, electrically adjusted, heated and folding door mirrors, as well as heated front seats, cruise control and rear parking sensors.

Alternatives to the Hyundai Tucson Mk2

The Tucson’s closest rival is the Kia Sportage, which is identical under the skin; the cars use the same platform and running gear. The Kia gets an even longer warranty than Hyundai’s five-year deal; at seven years, it’s an industry benchmark. 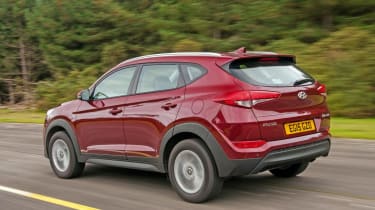 Another tough adversary is the Nissan Qashqai, which is practical but not necessarily as reliable as you’d expect. More impressive is the Peugeot 3008, which looks smart inside and out, and offers good value on the used market. The same goes for the Ford Kuga.

The Renault Kadjar is another stylish alternative, and it’s mechanically related to the Qashqai. Don’t overlook the Honda CR-V, either, or the Mazda CX-5.

Manual diesel Tucsons can suffer from clutch judder; a redesigned clutch is available.

Trailer Stability Assist is standard on all models, meaning the Tucson is an accomplished tow car.

Entry-level Tucsons feature a mobility kit; SE cars up (with the exception of 1.6 GDi BlueDrive models) get a full-size spare. 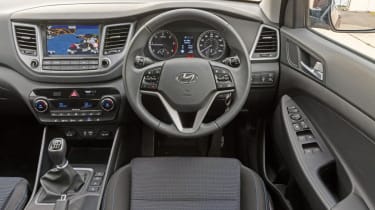 The Tucson’s well-made, well-equipped and spacious cabin is a great place to spend time – especially in high-spec cars with heated seats and leather trim. The infotainment system is intuitive and there’s plenty of legroom in the rear. In addition, the boot is reasonably spacious; it’ll stow 513 litres or 1,503 litres when the seats are folded.

Discounted servicing is available once a Tucson turns three; the schedule runs minor (£119), intermediate (£189) and major (£249). Services include fresh brake fluid every other year and new coolant every 60,000 miles. All the engines are chain-driven, with no cambelts to replace. 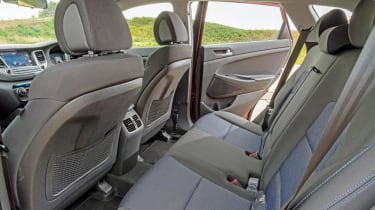 The Mk2 Tucson has been recalled only once, in July 2016. This affected 14,775 cars built up to 15 March 2016. The problem centred on the bonnet safety catch which could fail, allowing the panel to fly up at speed. It didn’t help that the warning light to flag up the fault also wasn’t working properly, so this had to be fixed, too.

The Tucson finished a strong 23rd in this year’s Driver Power satisfaction survey. Owners told us they love its practicality, safety features and infotainment systems, along with the comfortable cabin. The lowest score was 51st for running costs, with the engine and gearbox also coming in for criticism.