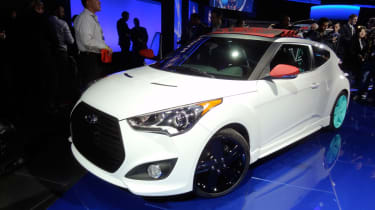 “It’s absolutely feasible to make it, but I’m going to give you the standard response – we’re waiting to gauge public reaction committing to anything,” Chris Chapman, a designer at Hyundai’s California studios told us. “If it’s positive, though, we’ll make it.”

The peel-back roof appears similar to the Fiat 500C and Citroen DS3 Cabriolet, but has a trick up its sleeve. It can slide all the way to the back of the car - where it sits on top of the tailgate - or slide right to the front above the windscreen, allowing room for large, tall objects to be loaded into the back.

“The way the roofline sweeps back and stays low really lends itself to this sort of thing,” Chapman added. “The roof is fully functional, too, and we built it in-house.”

Although the initial idea was to have a surfboard poking out the back, playing on the California connection, Hyundai chose to use a single-gear bike or ‘fixie’ for its more global appeal. The grip tape on the tailgate and floor tiles, which are made from stickered-up skateboards, are designed to enhance the Veloster’s youthful appeal.

The mismatched 18-inch alloy wheels and bold colours showcase the greater level of personalisation, and Hyundai says the C3 offers buyers a choice of mirror caps as well as bespoke designs on the seat backs and the roll-top roof itself.

It's powered by the same 1.6-litre turbocharged four-cylinder engine as the road-going Veloster Turbo, which develops 184bhp and has a 0-62mph time of 8.4-seconds.

A seven-seat version of the Hyundai Sante Fe is also on display in LA. It offers more passenger space, thanks to a longer wheelbase and increased overall length, but Hyundai has no plans to sell the Santa Fe LWB in the UK.