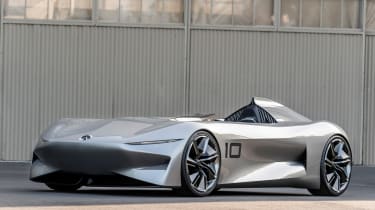 Infiniti has revealed another concept car at the Pebble Beach Concors d’Elegance, with this year’s design study following in the footsteps of the brand’s 2017 concept.

Called the Prototype 10 it’s another all-electric retro racer. Though unlike the Formula 1 inspired Prototype 9 revealed at Pebble Beach last year, it’s an electric speedster penned using the same design language as the Q Inspiration Concept from this year’s Detroit Motor Show, itself intended to showcase the brand’s design future. 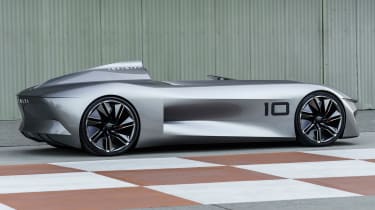 It’s the first design project to be wholly overseen by new design director Karim Habib, recruited last year from BMW. The classic speedster proportions are all there, with a long bonnet stretching back to an offset, bubbled cockpit. The tiny rear deck is home to a trademark speedster fin behind the driver’s seat, with the triangular feature embedded in the bodywork the housing for the rear taillight.

The concept’s face features extremely thin LED headlights and a prominent nose, and the tall lip to the concept’s tail is another nod to the Q Inspiration Concept. Elsewhere, deep set intakes line the Project 10’s flanks, and each wheel is housed within a bubbled arch. A third air intake is positioned atop the body and next to the cockpit.

Unsurprisingly, the Project 10 is fully electric. Infiniti has already announced that from 2021, every new Infiniti will arrive with the option of an electrified powertrain, with fully electric vehicles forming a part of that plan.

Infiniti hasn’t revealed any powertrain specifications for the Project 10, but says that the concept hints at a desire to produce all-electric sports and performance models in the future. The batteries feeding power to the electric drivetrain sit fiat in the low floor, allowing the driver’s seat to be positioned as close to the road as possible.

Now read about another concept created by Karim Habib - the BMW 2002 Hommage...