After a stunning debut at Villa d’Este, the BMW 2002 Hommage's new livery celebrates the birth of the turbocharged sports car 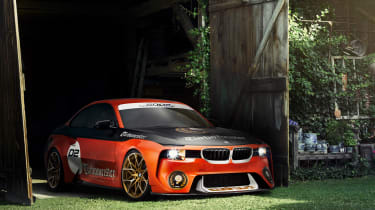 We've already seen the latest of BMW's anniversary presents, the BMW 2002 Hommage, before, but the concept car has undergone a makeover for the Pebble Beach Concourse d'Elegance.

The new orange and black livery features the word 'Turbomeister' emblazoned on the sides, rear bumper and bonnet. It's meant to celebrate BMW's relationship with the turbocharged car, as the original 1973 BMW 2002 Turbo "became the first series-produced vehicle in Europe to feature turbo technology."

Karim Habib, Head of Design at BMW, said: “With its iconic orange/black paintwork, the car has a colour scheme and livery synonymous in the minds of many motor sport fans with the triumphs of the 1970s.” 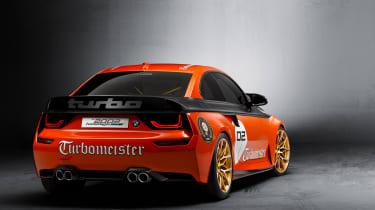 The 2002 Hommage originally debuted at Concorso d’Eleganza at Villa d’Este in Italy, and then went on to become a star of the 2016 Goodwood Festival of Speed's 'First Glance' paddock. From the very first reveal, BMW was boasting about a design that harks back to the 2002 Turbo from the seventies. “Exactly 50 years ago, the 02 range kick-started an era of success for BMW,” said Adrian van Hooydonk, senior vice-president of BMW Group Design. “This compact coupé is one of the vehicles which made the brand what it is today.”

Riding on the same wheelbase and with the same engine as the M2 Coupe, the 2002 Hommage gets short overhangs as an unabashed nod to its predecessor. A deep front splitter is shaped by three large air intakes, and the shark-nose kidney grille leans inwards at the bottom.

Controversially, it strays from modern BMW design language by discarding the usual quad lights in favour of the original 2002’s single outboard headlights. Where the old car had a full-length chrome strip, the Hommage replaces that with carbon fibre that runs around into the grille above the headlight. This breaks up the unique Space Race Metal blue paint finish, with high-gloss paint at the bottom and matt at the top. The glasshouse is unmistakably M2 and remains unchanged. 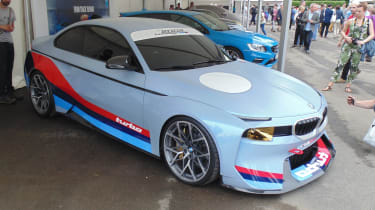 It features oversized front and rear wheelarch bulges, complete with 20-inch wheels and tyres, which hide gold-painted M brake calipers. The rear end does without a wild spoiler, but lifts up the bootlid to create downforce. Below the bumper, the quad tailpipes remain.

The latest concept follows a strong recent tradition of Hommage cars making their debuts at Villa d’Este, including last year’s CSL Hommage, the Vision Future Luxury concept in 2014 and the Grand Lusso Pininfarina collaboration in 2013.

Check out the rest of our Goodwood FoS coverage here...