BMW Gran Lusso revealed, which hints at how a BMW 8 Series Coupe could look 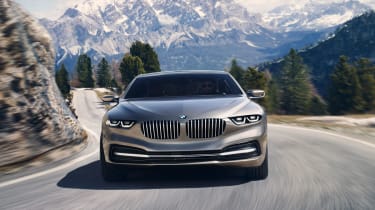 The BMW Gran Lusso Coupe has been officially unveiled at the Concorso d'Eleganza Villa d'Este near Como, Italy, hinting at the future look of the 5, 6 and 7 Series.

Created in conjunction with Italian design house Pininfarina, the car could also form the basis of a new 8 Series Coupe that would sit at the top of the range.

The Gran Lusso already has several trademark BMW styling cues, such as a stretched-out bonnet, double-kidney grille and the Hofmeister kink in the rear window line.

Still, it's clear this is a new generation of BMW design, with the narrow lights, larger grille and single stretched air intake expected to appear on all of BMW's future luxury models, from the 5 Series upwards. The current 7 Series is due to be replaced at the end of 2014, and the new model will be the first car to get BMW's latest luxury design language.

A new 8 Series isn't expected to debut until at least 2015, but when it does arrive it'll probably look very similar to the Gran Lusso. That includes the tail-lights that stretch all the way across the rear, and a roofline that flows into the bootlid through a pair of buttresses. Mounted on each of these is a subtle V12 badge, referring to the engine under the bonnet of the concept. BMW hasn't confirmed its output or capacity, but it could be the 536bhp 6.0-litre twin-turbo used in the 760Li.

The Gran Lusso's cabin has plenty of exotic materials, such as kauri wood trim sourced from New Zealand and a rooflining finished in Italian virgin wool. It seats four, but BMW claims it has rear legroom “almost on a par with that of a big luxury sedan”.

The new 8 Series could form part of BMW's plans to release 10 completely new models by the end of 2014 – it fits with the upcoming 2 Series and 4 Series coupes to fill gaps in the range. It would also give BMW a rival to the new Mercedes S-Class Coupe.