Infiniti has revealed the new Q30 premium hatch at the Frankfurt Motor Show, and we've got a a full set of exclusive pictures 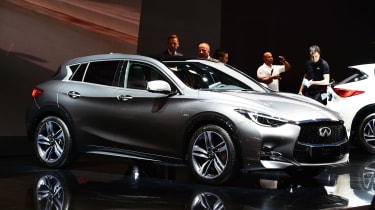 The Infiniti Q30 has been revealed at the Frankfurt Motor Show - and you can see the car in full with our exclusive gallery. The Audi A3 rival is the brand’s first entry in the premium compact hatch class, and goes on sale at the end of the year.

The striking exterior is relatively unchanged from the concept, first seen back in 2013. The interior gets a different layout and overall design to the Q50 saloon, with a central infotainment screen and three banks of switches below. 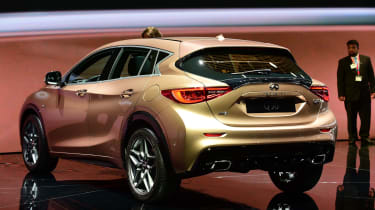 Upmarket features include a suede-like material used to cover the roof and door pillars. The Q30 shares its platform and engine range with the Mercedes A-Class, despite being a rival. Later on in 2016, it will also spawn a jacked-up QX30 crossover, similar in concept to Mercedes’ GLA, with which it also shares its underpinnings.

The curvy front end and large central grille remain unchanged from the concept, although extra chrome has been added and the bumper design is new. The dramatically swoopy side profile is familiar, too, while the rear is quite fussy with plenty of lines and curves present.

We know that the Q30 and the QX30 will share the same platform as their immediate rivals, the Mercedes A-Class and GLA small crossover. Turbocharged four cylinder petrol and diesel engines will also transfer over, and the car pictures sports a '2.2d' badge indicating that the diesel will be the priority at launch.

Both new Infinitis will be the first to be built at Nissan's Sunderland plant, that has been expanded at the cost of £250million in 2015 in order to facilitate building the models.

Do you think Infiniti's new Q30 stands a chance competing against its mainstream rivals? Let us know in the comments below. 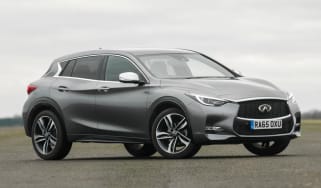