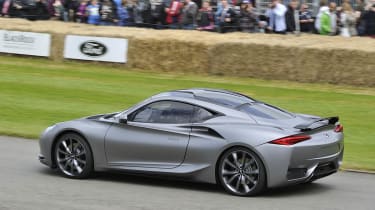 The new Infiniti Q30 hatchback will offer a more exciting drive than the Nissan Pulsar to differentiate it from its cheaper Nissan rival, according to Nissan vice-president Andy Palmer. “The Q30 will have a much greater focus on handling. It’s very emotional in its design, and there will be a number of derivatives of it.”

Palmer was largely coy about what derivatives of the Q30 hatchback we can expect, saying: “We’ll work with lifestyle themes around the car… different environments it can work with, and different people it can work for. Not everyone wants a sport version.”

So, does that mean we can expect an Audi Allroad-style crossover Q30? “There’s a lot coming, watch this space,” came the reply.

We also asked Palmer if Infiniti’s electric supercar concept car, the Emerg-E, will ever see production. “There’s room in the mid-term plan for a halo car of the Emerg-E nature. The design execution still needs some discussion, though. But yes, you can see a halo car in our future,” he said. Will it be all-electric, a hybrid, or just use the Q50 Eau Rouge concept’s 560bhp bi-turbo V6?

“We need to be progressive”, Palmer explained. “A hybrid fits the Chinese market conditions and portfolio overall best. You still have to reach a certain line on a [profitability] graph even if you’re doing a supercar. I would expect it to have some kind of hybridisation.”

Aside from hybrid supercars, Infiniti is also hard at work on fully electric models, utilising the next-gen Nissan Leaf’s powertrain. “We want contactless charging, and we think we can do that,” Palmer said. “We want the customer to be able to drive home and park the car on a charging mat and have it charged in the morning. We don’t have the smell of diesel on our hands any more.”

Meanwhile, the Nissan ‘ZEOD’ Le Mans racer project will continue to influence Nissan’s road cars, including a plug-in hybrid line-up similar to Audi’s burgeoning e-tron range, Palmer confirms. “ZEOD [Zero Emissions On Demand] as a racing concept is at an end. But on the road we will have the Bladeglider, carrying that that idea on.

ZEOD will be our name for plug-in hybrids – the racecar is our poster boy. We set two goals for Le Mans: an electric lap and [achieving a speed of] 300kph. We managed both of those, which ticks all our boxes, and made history.”