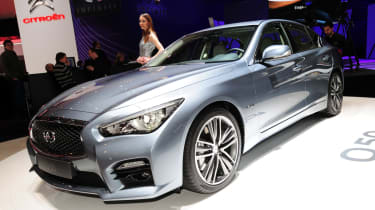 Infiniti Red Bull drivers Sebastian Vettel and Sebastian Buemi have been used by the Japanese premium car maker to make final adjustments to and sign off the ride ad handling of the new Infiniti Q50.

Test driver Buemi covered the most miles in the Q50 – Infiniti's compact exec set to rival the Audi A4, Mercedes C-Class and BMW 3 Series – while Vettel also took to the wheel at Infiniti’s test track in Japan. The F1 stars' input was used to tweak suspension and steering settings of the Q50, prior to the car’s launch in June this year.

The Direct Adaptive Steering system is a first in a production car in being all electric, but with a mechanical failsafe. The benefits include the elimination of bump steer kickback through the wheel, while Infiniti claims there’s as much feel and feedback as in traditional mechanical systems.

Infiniti boss Andy Palmer told Auto Express that the Q50 was “tuned and ready for Europe”, with an efficient 2.1-litre 168bhp diesel under the bonnet – the first fruits of Infiniti’s relationship with Mercedes-Benz. A new six speed manual and seven speed auto gearboxes will be provided by Mercedes, too.

The engine is already used in the Mercedes C-Class and E-Class models, but in the Infiniti it should return impressive economy and emissions figures of around 64mpg and 115g/km.

The Q50 is slightly bigger than a 3 Series with excellent rear legroom and okay headroom. It features plenty of tech on board, with a dual touch screen system: one for navigation and the other for infotainment controls.