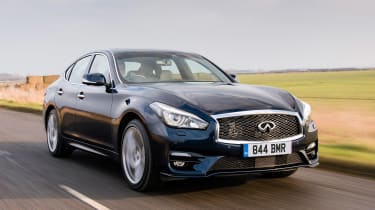 The new, more efficient, 2.2-litre diesel is a welcome addition to the Infiniti Q70 and should help to win over more buyers, including company car users. But it still doesn’t drive as well, or look as good, as German rivals, so is hard to recommend.

The Infiniti Q70 has never set the world alight. With thirsty petrol and diesel engines and quirky styling, the premium Japanese car has failed to worry the likes of the BMW 5 Series, Mercedes E-Class or the Audi A6.

Last year, Infiniti changed the name of the car from M to Q70, but it shifted just 34 cars, making it rarer than some of the most exotic supercars on UK roads.

That could all change with the updated version. Powered by a Mercedes-sourced 2.2-litre, four-cylinder diesel, Infiniti believes it now has the engine to tackle the premium car class head-on. 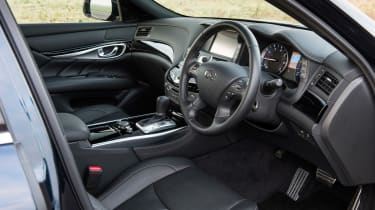 But that’s where the similarities end, as on the road the Q70 falls short of the 5 Series with woolly steering feel, cumbersome dynamics and a slow-shifting seven-speed auto. The engine is also lacking in refinement.

The cabin is cluttered with buttons, but there’s plenty of kit including leather, sat-nav and reversing camera lags behind BMW 5 Series and Mercedes E-Class.

There’s loads of room in the rear of the car, but the Q70's 500-litre boot trails its rivals as well.