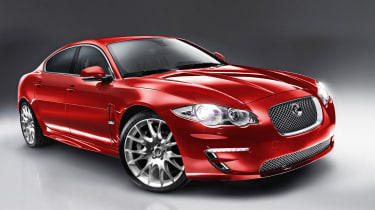 The baby Jaguar is back! Following our previous recent story, bosses at the British firm’s parent company, Tata, have confirmed that a BMW 3-Series rival – designed to sit below the XF and replace the X-Type – is already under development. And our exclusive pictures show how the compact newcomer could look.

The announcement came from Tata chief executive, Carl-Peter Forster. He admitted that for Jaguar to take on its German competitors globally, a smaller, higher sales volume saloon was a necessity, and so work has begun on the new car. Although the Ford Mondeo-based first-generation X-Type was hardly a sales success, a replacement is on the cards – thanks in part to the positive reception the RD6 concept received at the Frankfurt Motor Show seven years ago. In keeping with the XF and XJ, the next car will feature a cutting-edge design, but to separate itself from the larger models, there will be plenty of smooth curves instead of sharp creases.

As our images show, an interpretation of the XF’s rectangular mesh grille and swept-back headlights would give the front end the new Jaguar family look. At the back, more rounded edges to the boot, boomerang tail-lamps and pronounced curves over the wheelarches create a distinctive and muscular stance. Under the skin, the plot thickens, though. Our sources have revealed that Jaguar is working on an all-new aluminium rear-wheel-drive platform for the X-Type replacement, with the aim of making it the lightest, best-handling car in its class.

Such a massive undertaking would absorb a large chunk of Tata’s £1billion per year research and development budget for Jaguar/Land Rover, so to spread the costs, the modular platform will also be used on the next-generation XF, XK and an all-new sports. Bearing in mind that the big XJ already uses an aluminium chassis, this would mean the range would eventually be all aluminium, with significant benefits for fuel economy.

Also boosting the newcomer’s green credentials will be a pair of downsized four-cylinder engines – diesel and petrol turbo units, with the former replacing the Ford-sourced 2.2-litre oil-burner that’s currently fitted to the Freelander in Jaguar/Land Rover’s portfolio.

A range-topping 3.0-litre V6 turbodiesel could also be offered, as well as a hybrid version in 2015. This would pair the V6 diesel with a 35kW (47bhp) electric motor integrated into an eight-speed ZF automatic transmission.

When it appears in 2012, the 3-Series rival will be earmarked as Jaguar’s big-seller – but even without it, things are going well for the British brand. Latest sales figures show that it shifted 6,776 cars in June – 59 per cent more than in the same month last year.

From the BMW 3-Series and Porsche Boxster to the Audi A6 Avant, Jaguar has all of its rivals covered! As well as giving the exciting new X-Type the green light, Tata chief exec Forster has confirmed the F-Type will be built.

The new roadster – which we revealed in Issue 1,117 – is likely to be badged XE, and sit below the XK in the range. It will feature a fabric roof, cost around £50,000 and make its debut within the next 18 months.

Also in the pipeline is an estate version of the XF, due on sale next year, as well as a long-wheelbase version for the Chinese market.