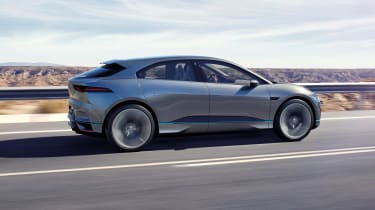 Jaguar’s new I-Pace SUV, due on sale in 2018, could form the basis of a first-ever all-electric sports model according to the boss of Jaguar Land Rover’s Special Vehicle Operations division.

Speaking to Auto Express at the launch of the I-Pace in Los Angeles, John Edwards said, “Of course it’s something we’ll look at.” However, the I-Pace already promises plenty of performance with a 0-60mph time of around four seconds expected, prompting Edwards to say: “The car will already be very quick and I’m not sure how much faster people will want to go.”

• "Could hydrogen be forgotten as electric power surges on?"

Jaguar Land Rover’s engineering boss, Wolfgang Ziebart, told us that a balance had to be decided upon with the I-Pace’s 90kWh battery pack between performance and charging time. “Increasing performance is relatively easy,” he told us, “But that would mean less range.”

However, that problem could be eased with Ziebart telling us that he expected the next big step in battery energy density to take place in three to four years time.

Would you like to see an SVO-fettled electric Jag? Let us know below...