We try the Jaguar XF’s 237bhp twin-turbo 2.0-litre diesel for the first time to see if it offers anything over the lesser-powered versions 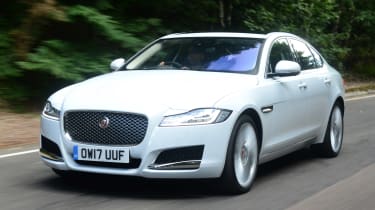 The extra punch this 25d model offers over lesser XF diesels is certainly welcome, and the Jag’s classy styling, well-balanced chassis and plush interior make it a strong executive choice. However, the efficiency penalty this brings is a sticking point – and particularly relevant in the fleet-led executive car market. As such, we’d still recommend the 178bhp version, which offers a stronger balance of economy and pace.

Jaguar Land Rover’s rapid expansion in the last couple of years has to be one of the UK’s great industry success stories, with a variety of core new models now enjoying global popularity.

But German rivals still have the edge when it comes to the vast array of engine and trim choice on their cars. To help cover more bases, the XE, XF and F-Pace now benefit from a twin-turbo version of the Ingenium four-cylinder diesel. Badged ‘25d’, the updated units boast 237bhp and 500Nm of torque – and now we’re trying it in the XF for the first time to see if it’s worth the extra cash.

The XF 25d bridges the gap between the base four-pots and the 296bhp V6 diesel in terms of price, performance and efficiency. The Portfolio model we have here is a considerable £4,300 less than the V6, but just over £2,000 more than the 178bhp 2.0-litre diesel. 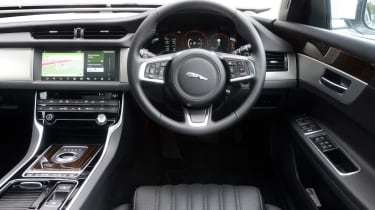 For that you get an extra 59bhp and 70Nm of torque, which is enough to shave 1.6 seconds off the 0-62mph sprint time and – thanks to it being a fair bit lighter – bring it within three-tenths of the V6. It gets off the line smartly, with a broad spread of torque helping it build speed with minimal fuss. It doesn’t need to be worked as hard as lesser XF diesels, either, with plenty of punch for overtaking. The linear power delivery means it doesn’t quite produce the in-gear shove in the back of the V6, however.

The eight-speed ZF gearbox helps make the most of the new engine, too, keeping revs right in the power band and swapping cogs smoothly. However, like cheaper variants, it’s the noise that will make some buyers pine for the V6. At idle the four-pot XF clatters more than you might expect, and things can get a bit raucous at the top of the rev range.

That’s a minor issue, though, as those using the XF for what it is intended – that is, long distance cruising – will find refinement is pretty good. What may be a deal breaker, however, is the sizeable drop in claimed efficiency compared with the single-turbo car: spec-for-spec, 65.7mpg plays 53.3mpg, and CO2 emissions rise from 114g/km to 139g/km.

That penalty may be too much to swallow even for private buyers, while business users will find the jump in Benefit-in-Kind contributions from 24 per cent to 29 per cent disappointing. It’s a pity, because while the extra power complements the XF’s engaging yet supple chassis, the 178bhp diesel isn’t particularly sluggish – and for most buyers will represent the best performance and efficiency compromise. 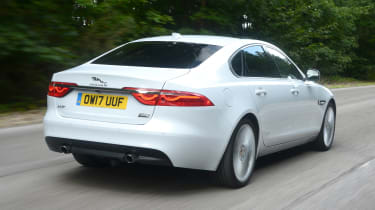 Click on the gallery above to see more of the Jaguar XF 25d...