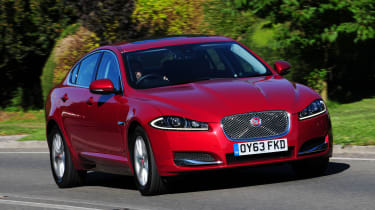 The XF is becoming a more mainstream choice, thanks to its improved emissions performance. But it’s great that the eco tweaks don’t impact on the car’s dynamic performance or stylish interior, which set it apart from rivals. Some of the design is beginning to date, but this latest XF has more appeal than ever.

Jaguar's bid to become more mainstream has taken a step forward with the arrival of a new XF, which gets a few tweaks for the 2014 model year.

The headline news is that the 161bhp 2.2-litre diesel – rather than the 197bhp version – has been revised and given a new stop-start system that helps trim 6g/km off the CO2 figure and boost claimed fuel economy from 55.4mpg to 57.7mpg.

That means the XF drops under 130g/km, and cuts its BIK company car tax rate from 22 to 20 per cent. So if an XF pops up on your company car list, what can you expect? Well, the diesel engine is well isolated, keeping both noise and vibrations to a minimum, although there is a little tyre roar from the road at speed.

The ride is comfortable and cosseting, with the fact that its damping was signed off on UK roads making the XF a refined and comfortable car to drive long distances here. While the XF is most at home on a cruise, it still handles very well, with smooth, accurate and sharp steering helping to give the car an agility that belies its size.

The smooth eight-speed automatic gearbox works well with the engine, responding quickly, and giving the car a positive and sprightly feel. Revisions to the engine’s cooling system, and larger exhaust gas recirculation valves contribute to the emissions improvement, but the most obvious tweak is the new Twin Solenoid Starter stop-start system.

It cuts the engine smoothly, with an ECO light illuminating on the dash to tell you the engine’s off. It restarts very quickly, too, thanks in part to the fact that the system has its own battery. This also means you don’t lose air-conditioning power when the engine’s off. Aside from the new engine, there are no other changes to the XF for 2014.

But that means you still get an interior that gives a greater sense of occasion than its rivals. That said, there are some drawbacks. Rear-seat space remains at a premium for taller passengers, and some of the switchgear is starting to feel a bit old. The seven-inch central touchscreen now seems a bit small and doesn’t always respond when you press it.

The tweaked XF also can’t quite compete with the BMW 520d in terms of pure numbers. In auto form, the facelifted 5 Series boasts more power and is faster than the Jag, yet its 181bhp 2.0-litre diesel can still return an impressive 62.8mpg and 119g/km of CO2. Yet while the BMW impresses, its ubiquity and dull styling work in the XF’s favour. Your head says BMW, your heart says Jaguar. At least now your fleet manager is more likely to agree with the latter.