The 1994 'X300' Jaguar XJ6 was an unashamed retrograde model. Essentially an XJ40 with 'traditional' four-headlamp front 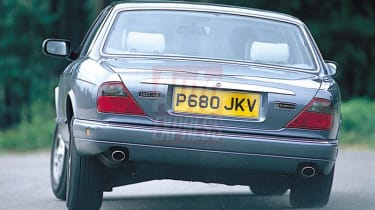 The 1994 'X300' Jaguar XJ6 was an unashamed retrograde model. Essentially an XJ40 with 'traditional' four-headlamp front and sleek rear, it had underpinnings that benefited from Ford investment, giving a once-unreliable car German levels of build and dependability. The shallow boot, tight interior and dated dash remained but, once on the move, the model's supreme refinement and ride soon eased away any gripes. Both the 3.2-litre and 4.0 straight-six engines were amply powerful, if thirsty - although not as bad as the 6.0 V12. The supercharged XJR remains a bruiser, although all models will rival a 5-Series in the twisty stuff. A decade on, you can buy this Jag used with confidence. And as early cars start from a mere £4,000, only the high running costs spoil things.Checklist * Engine: the Jag demands religious maintenance. While engines are sturdy, XJRs can suffer head gasket failure - look for smoky exhausts and white 'goo' in oil filler cap. * Radiator: thermostat failure is common in older models - check for a temperature gauge rising slowly and not reaching 'normal'. It's easy to fix, but troublesome if ignored. * Interior: ensure all electrical items work inside; rectifying niggles can be time-consuming and expensive. Pay particular attention to electric seats and climate control. Bodywork: check external chromework, as fixing it costs. Multi-part bumpers are pricey, with a genuine centre blade at more than £400. Also check for botched panels - look for ripple or poor paint finish. * Tyres: all XJs are heavy on tyres and brakes, and wheel alignment is critical - only use retailers with Jag experience. Specialists will be cheaper than main dealers.Driving impressions By modern standards, the X300's interior is cramped and dated. But it's serene. The engine is whisper-quiet, the ride is brilliant and the seats sumptuous. The near-vertical windscreen and long bonnet give the Jag a regal feel. Handling is better than you'd expect, but it's a car for cruising in, so an auto is essential. V8s aren't much faster than six-cylinders, but are more refined. The XJ12 is wonderful, but rare and thirsty.Glass's View Big cars tend to struggle used, and Jaguar's XJ is no exception. It's thirsty, expensive to repair and has a depreciation rate that'll make you cry. But for the second-hand buyer shopping at the older end of the market, this is great news. In terms of value for money, you can't beat it - the previous owner will have swallowed up most of the depreciation, so you'll get a lot of car for the money. Just buy carefully - high mileage isn't necessarily a problem, but a service history is a must. Jeff Paterson, senior editor, Glass's GuideLIfe With A Jaguar XJ Where else could you get such incredible performance, luxury and style for less than £7,000? My 1995 car is utterly reliable, and the expensive running costs are offset by the purchase price. Ken Hughes, Tarporley, Cheshire My 1996 XJR cost the same as my neighbour's Fiat Punto. With a private plate, people think I paid over £30,000 for it. The best car I've ever owned.Neil Denyon, Dartford, Kent

If looks alone influence your car buying decisions, the XJ's curves will have already seduced you. Compared to the old XJ40, it's a stunner. Inside, there's still a fight between traditional and modern, but leg and headroom are improved - although both are cramped for a car of this size, as is the boot. But on the road, the XJ is a delight. The steering has more weight and precision than before, while the ride is unsurpassed. What's more, the handling is much improved.