Revised high-performance Jaguar XJR is a leftfield choice, but still a desirable one 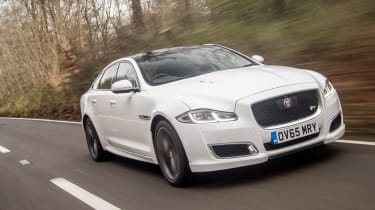 The XJR celebrates its 20th anniversary in 2016, and while the new car isn’t as eagerly anticipated as it once was, the fast Jag is still a compelling super-saloon. The facelift has added a little grace to the menacing looks, and the new technology offers more refinement. It’s still a left-field choice, but one that will provide endless satisfaction.

However, the car’s glory days were way back in the nineties. In recent times, the current XJR hasn’t enjoyed quite the same attention. Jaguar hopes this 20th anniversary refresh will increase its appeal. 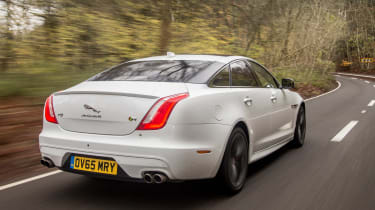 As with the standard XJ, the XJR has been given a slight facelift. At the front there’s a larger and more upright grille, while the feline-like, swept-back headlamps now have two J-blade daytime-running lights.

There are also new rear lamps with – yes, you guessed it – J-blade LED graphics, and there’s a fresh black exterior pack, costing £850. Our test car’s white paintwork and black pack gives the type of intimidating looks a Mercedes-AMG S63 can only dream of, while the XJR’s swoopy styling still offers a classic and raffish Jaguar elegance. 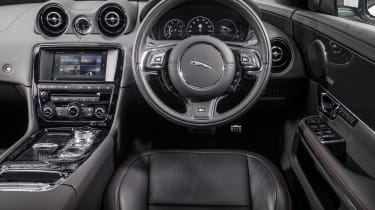 There are a few interior tweaks, though; XJRs can be specced with Jaguar’s new InControl Touch Pro infotainment system, which is a vast improvement over the pre-facelift XJR’s dated touchscreen. It gives owners and passengers a Wi-Fi hotspot and door-to-door sat-nav (which means that once you’ve finished your journey in the car, the rest of the trip is mirrored on to your phone so you can complete it on foot).

The TFT dials have also been updated, and there’s now the option to switch the conventional set-up for a full widescreen map – just like you’ll find in Audi’s brilliant Virtual Cockpit. In addition, a suite of new safety features includes queue assist and traffic-sign recognition.

However, the biggest change is from behind the wheel. Due to the clever driver-assistance features, the old XJ’s hydraulic steering has been ditched in favour of a new electro-mechanical version. While that could spell bad news for the XJR’s involving drive, it’s not as serious as you’d think. As seen in the XE and XF, Jaguar has proved it can make electric power-steering that’s brimming with feedback – and the same is true of the XJR. 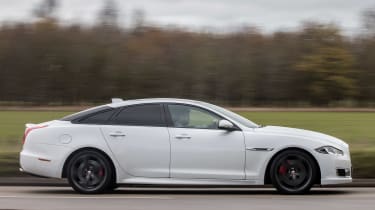 The steering is just as weighty as before, and unlike other large super-saloons – the S63 and Audi S8, for instance – even the most minute steering inputs affect the car’s position on the road. Moreover, while there’s no doubting the Jag’s sheer size, it feels agile, diving into corners with little body roll.

It’s fast, too. The 5.0-litre supercharged V8 still packs 542bhp and sprints from 0-62mph in 4.6 seconds (two-tenths slower than the S63, half a second slower than the S8 and 0.8 seconds off the new S8 Plus), with simply astounding mid-gear acceleration.

Unlike in an F-Type R, the XJR still retains its limo-like character by not allowing the thunderous V8 noise to deafen the cabin. It’s there and makes its presence known, but it’s a little on the quiet side for us. 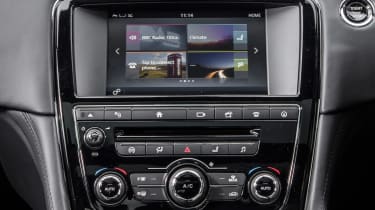 One thing that hasn’t been rectified, though, is the ride. While Jags have always been known for their supreme comfort, the current XJR’s long been the exception to the rule. It’s a small issue, however, and arguably a negative point that most buyers of such performance cars are happy to live with.

Thankfully with this update, another classic fast Jag trait remains; it’s cheaper than the competition. It’s nearly £30,000 less than the S 63 – a considerable saving in anyone’s book. However, you’ll still need deep pockets to run one. The XJR will emit 264g/km of CO2 (£505 per year) and struggle to return more than 20mpg.