The Jaguar XJ has long offered something different compared to its German rivals, and part of its beauty has been its exclusivity value. This facelift has not only given the XJ a more dignified look, but it has also made the car more competitive with the Mercedes S-Class and BMW 7 Series – the interior changes are very welcome. While this R-Sport model looks great and compliments the XJ’s fine handling, we would go for a less sporty-looking version, preferably in long-wheelbase form as these models flatter the XJ’s key strengths.

The fact that a model has passed the million car milestone often goes unnoticed or uncelebrated, but for Jaguar it’s very big news indeed. Jag’s flagship and the car that has always stood as the very essence of the brand, sold its millionth unit this year, taking a ‘mere’ 47 years to do so. And timed perfectly to coincide with the landmark, Jaguar has treated the XJ to a comprehensive makeover to keep it fresh.

The current mkV XJ shape caused a stir among Jag fans when it was launched in 2009, largely because it was the first XJ not to be evolutionary. Ever since the XJ6 arrived in 1968, every XJ that’s come after it as looked to the original for its design inspiration. Ironically, this facelift doesn’t rewrite the current car’s rule book and subtly builds on the revolutionary shape. 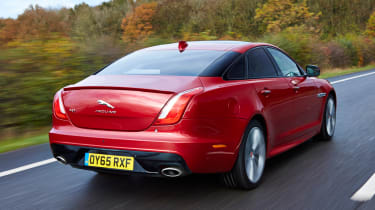 So, to bring it in line with the new XE and XF, the XJ gets ‘J-blade’ day-running lights but with twin blades. They neatly curve around full-LED bulbs – and it’s these headlight clusters that present the XJ’s most obvious exterior change. Park the outgoing car next to the facelifted one and you’ll also spot that along with the new lights, the grille looks slightly different. 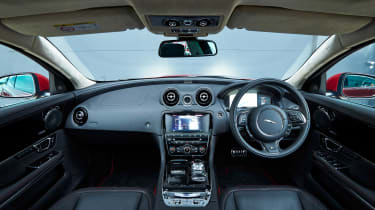 Elsewhere there are new chrome trimmed air vents in the front bumper, while to the rear, there are new light clusters with J-blade LEDs and a new bumper complete with two oval exhausts.

It’s on the inside where the changes are most noticeable though. The XJ becomes the first Jag to get InControl Touch Pro. An eight-inch touchscreen offers a variety of App-based systems as well as pinch-to-zoom and swiping control gestures.

The XJ’s crisp 12.3-inch digital dials can now display a full-width navigation screen too. This doesn’t have quite the wow factor of Audi’s Virtual Cockpit but it’s a nice touch to freshen the cabin. 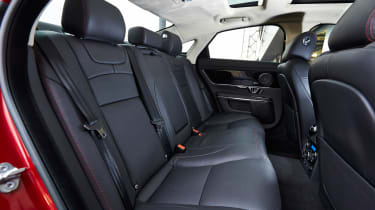 Two new trims join the range: top-spec Autobiography and R-Sport. We tested the latter and it offers some of the hot XJR’s styling, like new side sills, a three-piece front splitter, side vents and a spoiler.

Only available in short wheelbase form, the R-Sport can be ordered with the F-Type’s 335bhp 3.0-litre supercharged petrol or Jaguar’s tweaked 3.0 TDV6. It’s an engine we recently tested in the new XF and thanks to 296bhp it provides superb grunt throughout the rev range. 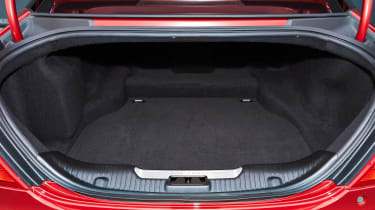 In fact, with a mighty 700Nm, it feels far more urgent and keen to deliver thrills than the supercharged petrol – a sensation helped by the quick fire eight-speed auto.

In order to allow a glut of new safety kit to be offered on the XJ – like adaptive cruise control with queue assist and semi-autonomous parking – the old car’s hydraulic steering has been replaced with an electric system. The good news is that, just like the XE and XF, the XJ’s steering is fast and precise. And while it lacks a little feedback, it easily beats the Mercedes S-Class and BMW 7 Series for involvement.

The XJ’s greatest characteristic remains intact for this facelift, though. Turn down a country road and the XJ’s size disappears and it almost feels as agile as the XE. But the big Jag’s biggest failing still hasn’t been addressed, either – and that’s the ride. 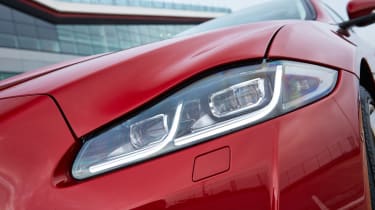 It’s comfortable and adaptable – the car can switch from comfort to dynamic at a prod of a button – but not as supple as you’d expect it to be. The 20-inch wheels transmit road noise into the cabin and the ride is a little more unsettled than it really should be.

It’s not overly spacious in the rear either, with the XJ feeling a little claustrophobic compared to short wheelbase versions of the S-Class and 7 Series, and, in R-Sport trim, around £2,000 pricer too.