The fastest Jaguar XJ in history might not be quite what the world needs in 2017, but that doesn’t prevent it from being a delightful thing to drive. It doesn’t neglect what the XJ is best at, however, cementing itself as a suitably luxurious limo from the rear seats. At a whisker under £94,000, it’s much cheaper than rivals from Mercedes and BMW, too, even if it is starting to show its age in places.

There is something curiously magnificent about a two-tonne Jaguar XJR capable of 186mph and 0-60mph in 4.2 seconds, even if it is somewhat out of kilter with what’s going on in the rest of the car world in 2017. It costs £93,170, and under the long and rather lovely bonnet of this new XJR 575, you’ll find a 567bhp (575PS in metric horsepower) supercharged V8.

It’s based on the outgoing 542bhp XJR, but the differences are few and far between. Jaguar’s engineers have squeezed another 25bhp from the maker’s ubiquitous 5.0-litre engine. There’s also a series of small-but-significant styling changes, both inside and out. These include LED headlights as standard, and unique new double ‘J-Blade’ daytime running lights, as well as special badging and gloss black details. Plus there’s a range of new colour options that include the striking Velocity Blue seen here.

On the inside, which remains a place of rare opulence (especially in the rear) there’s a new 10-inch InControl Touch Pro touchscreen with full-screen navigation and other minor tech upgrades. All cars get a digital TV, DAB radio and an 825W Meridian stereo. Frustratingly, Apple CarPlay and Android Auto still aren’t available, which will be disappointing for technophiles. But you will also notice special 575 badging and red stitching to mark out the furious saloon. 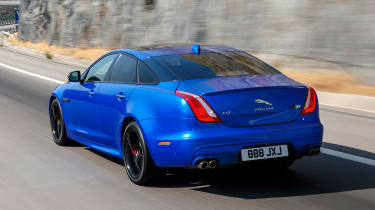 Elsewhere, Jaguar’s flagship four-door has now got more intelligent safety features under its skin, including Autonomous Emergency Braking, Lane Keep Assist and Driver Condition Monitoring. In fact, there are so many autonomous features in the XJR that it could almost certainly drive itself.

Thankfully, however, that’s a while away yet. And a good thing, too, because the 575 is a pretty lovely thing to drive – even if it does weigh the thick end of two tonnes. The version we get in the UK is rear-wheel-drive and has the regular XJ wheelbase, but in other markets it will be available with four-wheel drive and a long-wheelbase option.

The car we drove was the UK version, and on the move it felt very fast indeed. But it’s also luxurious, comfortable – especially in the brilliantly roomy individual rear seats – and beautifully made. It felt special, in a way that not many saloon cars do nowadays. 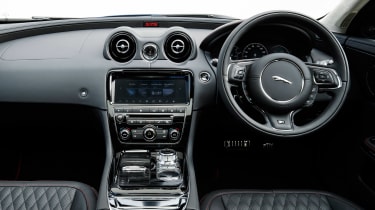 What the XJR 575 offers is a unique blend of sporting intent and pure luxury, albeit with a ride (in Dynamic mode, at least) that is no better than acceptable over rough roads.

Throw it at a corner with enthusiasm and it just sticks. You do become increasingly aware of its mass the harder you push, but it never wallows through tight bends. Fundamentally, the XJR always feels planted and extremely well controlled, with a distinctly sporting edge to its steering and chassis responses. But then, at the same time it also feels like a genuine limousine in the way it will waft along a motorway in near silence. In its Comfort setting, the XJR 575 offers a smoother quality to its ride – letting the electronic dampers do their thing. As a combination, it’s a deeply impressive thing to experience from behind the wheel.

Space in the rear seats is excellent, even in standard-wheelbase form. The boot is also vast, and the 80-litre fuel tank allows a decent range – despite the 575’s appetite for unleaded. Officially it’ll return 25.5mpg on the combined cycle and it emits 264g/km of CO2. Unofficially you’ll do well ever to see more than 20mpg. Mercedes-AMG’s far more expensive S 63 will allegedly do 28mpg.

But then, what do you expect from a two-tonne sports limo that can take care of just about every other car in Jaguar’s range in a straight line? It’s a wondrous car, the XJR 575, even if it is totally out of sync with the rest of the motoring universe.