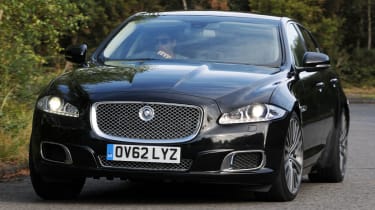 It's difficult for most of us to take a car like the XJ Ultimate seriously – the price tag puts it entirely out of reach. But for buyers at this end of the market, it’s good value. It’s hi-tech, has the luxury you’d expect from a first-class plane seat and is almost as quick as a Porsche 911. It has to stay on our lottery wish-list for now, though...

Admittedly, £120,000 is a lot of money for a Jaguar XJ, but this is the range-topping Ultimate model – complete with iPads and a champagne chiller, among all kinds of other luxuries.

And it’s not an unusual price for this type of car – the Porsche Panamera Turbo S costs a little more and the Mercedes S63 AMG a little less. They offer similar performance, boasting 0-62mph times of less than five seconds.

But the XJ Ultimate has a level of gadgetry unmatched by rivals. Unlike most cars, the first place you’ll want to sit in the Ultimate is in the back. The sculpted, electrically adjustable massage seats are the pinnacle of comfort, plus they’re heated and cooled. On top of the regular entertainment screens built into the headrests that allow passengers to watch TV or DVDs, there are two iPads that automatically charge when the ignition is turned on.

In between the rear seats is a champagne chiller that will keep your bubbly at a cool seven degrees Celsius, and a gloss-black table that lifts at the touch of a button. Hidden underneath that are two bespoke champagne glasses. The herringbone wood trim on the door panels is unique to the Ultimate, too.

At first glance, there doesn’t seem to be too many changes to the exterior, but the 20-inch wheels fitted to this car aren’t available anywhere else in the range. The large chrome oval exhausts and chrome-rimmed air intakes are giveaways, too – not to mention Ultimate badges at the rear and in the side vents.

One change you can’t see, but may notice, is a subtle tweaking of the suspension. This update aims to improve ride comfort for rear passengers, and there’s definitely a more luxurious waftiness to this car’s ride when compared to the slightly stiffer set-up of standard XJ models.

And what could be more ‘Ultimate’ than having Jaguar’s 503bhp 5.0-litre supercharged V8 engine under the bonnet? It offers serious performance, but the engine’s effortlessness and refinement are what impresses the most. Just a brief prod of the throttle will see you blast past slower moving traffic instantly. A subdued roar from the exhausts, plus a hint of supercharger whine under acceleration, only adds to the car’s sense of drama.

It’s the perfect engine for the ultimate incarnation of the XJ, but Jaguar plans to offer this car with its new 3.0-litre supercharged V6 petrol engine at a later date. That will help reduce the Ultimate’s high running costs, which include 24.4mpg claimed fuel economy and a £1,000 first-year tax bill.