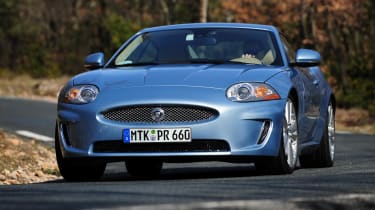 Don’t be fooled by the lack of the letter ‘R’, the all-new 5.0-litre V8 is a cracker even in non-supercharged form. Revised suspension allows it to corner with even more poise and the revised interior feels genuinely special. Ninety per cent of the time it’s every bit as good as the XKR.

If the 503bhp, £80,000 supercharged XKR is beyond your budget, don’t despair. Jaguar has updated its entry-level XK with a raft of engineering changes and a mild facelift inside and out, but can it improve on the pure driving experience of its predecessor?

The major addition is under the bonnet, where Jag has shoehorned in its all-new direct-injection 5.0-litre V8 in naturally aspirated form. Despite the absence of a supercharger, there’s still 379bhp and 500Nm of torque to play with – significantly better then the old 4.2-litre unit, and almost as much as the outgoing XKR. There are also new dampers and springs tuned for a sportier drive.

Styling changes are limited to new air intakes flanking the front bumper and LED rear lights, while in the cabin a revised centre console gets the dramatic rising gear selector from the XF.

It might not possess the explosive acceleration of the XKR, but this is still a very quick car. Jaguar has worked hard to deliver as much torque as possible low down in the rev range - the result is you rarely find yourself outside of the powerband. Floor the throttle and there’s a beautifully linear power delivery, too.

A burble from the exhausts builds to a spine-tingling shriek at the red-line – an even throatier noise than the XKR can muster, while the retuned suspension provides even more body-control around bends, but still retains the XK’s supple low-speed ride.

Unless you’re desperate for the XKR’s extra pace – the standard XK delivers the all the thrills for a fraction of the price.