A year with the sensational Jaguar XK, our car of 2006 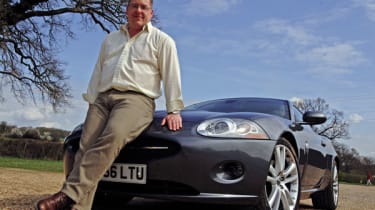 That's what was on offer for one very lucky reader. And as out prize guy explains, it's really lived up to the hype

It was Tuesday 5 September 2006 - a day I won't forget in a hurry. Driving to work along my normal route from Chipping Norton to Hursley near Southampton in Hampshire, I answered a call from Auto Express telling me I had won a new Jaguar XK for a year!

Convinced I was the butt of an elaborate prank, it wasn't until a call from Jaguar followed that it sank in. I had indeed won the magazine's competition prize.

A few weeks later and with much excitement, a friend drove me to Jaguar's Engineering Centre in Coventry. This is where I was to be fully acquainted with my new charge. Handing over the keys to this sensational-looking car was Jaguar's PR manager, David Crisp. After a briefing on all its bells and whistles, I took my first tentative turn of the wheel.

That was six months ago, and I'm now more than halfway through my tenure with the 4.2-litre Coupé. Although it's costing me a small fortune in fuel, running the XK has been worth every penny. My weekly 500-mile commute is now a driving extravaganza, and I particularly love the car's blend of comfort and power.

Meanwhile, my nine-year-old twins, Daniel and Alexander, like the attention they get when we're out on family outings (yes, they do fit in the back seats!), as the Jag certainly turns heads. On a recent trip to London we enjoyed a swanky meal and definitely felt at home as we parked alongside the Astons, Mercs and Porsches. How the other half live, eh?

The XK comes laden with goodies as standard, but, for me, the sat-nav/stereo system is the pick. It's so easy to use, and the traffic-warning system has saved me hours of pain on the A34.

Jaguar has certainly specced the Coupé to the highest level - I'm really going to miss the incredibly comfortable 16-way adjustable seats and keyless entry when I eventually have to hand the car back.

I've got quite accustomed to not having to fiddle around with keys thanks to the keyless system, and finding the perfect driving position is not going to be as much fun in my Saab 9-5.

It hasn't all been fault-free, though. I did have a problem with the engine warning light, which refused to go out. I contacted Jaguar direct, and it immediately sent over a technician to fix the glitch - which was traced to the management system.

The same level of care was offered at the 10,000-mile service, and the loan of an XKR was an unexpected bonus. However, of the two cars, I actually preferred the XK's more relaxed behaviour, to be honest. I was very happy to be reunited with it. The tyres were around 60 per cent worn, though, so all four were replaced - although thankfully Jaguar picked up the £950 cost.

I do think the looks are marred slightly by the hideously old-fashioned electric aerial, while I also had an issue with the fuel-filler flap freezing shut in cold weather. I had to thaw it out by placing my bare hands over it, which caused a few onlookers at my local petrol station to have a good chuckle at my expense.

Unfortunately, I'm sure the next few months will fly by, and it'll soon be time to dust off my own car again. I've got plenty of plans for the XK this summer, but I already know my family and I will be extremely sad to see the big cat go...