The XKR is pretty and endowed with superb road manners, a great cabin and muscular performance. 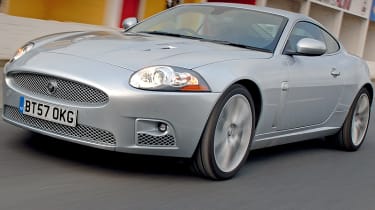 Driving What matters most for the XKR is driver appeal. There aren't many sporty design cues inside, but the cockpit has a real sense of occasion - and then there's the engine. The supercharged V8 is carried over from the old XKR and boasts only seven per cent more power, but the aluminium body means the new model weighs 100kg less, which is good news for performance. The supercharger noise that dominated in the old car has been toned down, while an active exhaust system varies gas flow, so it's quiet for cruising, but sounds like a powerboat when at full throttle. It goes hard, too - not that you realise it. Glance at the speedo, and you'll be surprised at the way the needle slips around the dial, as the supercharger's linear power delivery means acceleration never feels that potent. This lack of drama extends to every facet of the XKR. That's good news for cruising ability, but you feel rather distanced from the action. Put simply, the Jag isn't the hardcore driving machine we expected, though the steering is communicative, the six-speed auto shifts smoothly and the CATS adaptive dampers keep the body in check, despite more roll than you might expect. Ride quality is fantastic.

Marketplace No matter which angle you view the XKR from, it's a good looking car. Its bend of contemporary lines and E-Type-inspired detailing gives it a real visual advantage. Apart from, that is, the fabric roof of convertible models - and the electric pop-up aerial, that's plain ugly. Both hint at the fact Jag didn't have that much money to spend on development. Exterior developments over the standard XK are on the subtle side, too. The deeper front bumper is a touch brash, although we love the aluminium side vents, quad exhausts and branded brake callipers. Offered in either coupe or convertible guise, the XKR is the range-topping model in Jaguar's XK range, competing with the BMW 6-Series, Mercedes SL and Porsche 911.

Owning If money was short in development, the cabin shows little evidence of it - the design is fabulous, and getting comfortable is effortless, thanks to the Mercedes-style door-mounted seat controls. We do have a few bugbears though. The doors always need a second slam to shut properly, the Bluetooth phone system drops links and even four-year-olds will baulk at the size of the rear seats, particularly in the convertible. The XKR is easy to manoeuvre at low speed, and while visibility is a bit restricted in the convertible, it's bluster-free when it's down - and almost as rigid as the coupe. Naturally, fuel economy isn't great and insurance is the highest-possible group 20, but servicing seems relatively inexpensive and Jaguar dealers have a superb reputation. The three-year unlimited-mileage warranty is good too. What's more, residuals are also excellent - easily able to show up Mercedes and BMW rivals, and on a par with Porsche.