First pictures of the all-new Jeep Cherokee, which will debut at the New York Motor Show in March 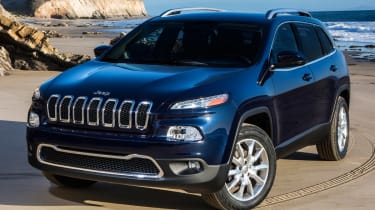 These are the first pictures of the all-new Jeep Cherokee. The new model will replace the Cherokee in Europe and the Jeep Liberty in the US, which means the Cherokee name returns to the North American market for the first time since 2001.

The new Jeep Cherokee will be unveiled at the New York Motor Show in late March and is set to go on sale in the US in May. It will arrive in the UK in June to take on the Ford Kuga, Mazda CX-5 and Honda CR-V.

The new SUV is a controversial design, blending traditional Jeep styling cues such as boxy wheelarches and a seven-bar grille with curvier Nissan Juke-style lights as the manufacturer bids to widen the car’s appeal.

The new model will be built in Toledo, Ohio, and represents a change in direction for the Jeep brand in terms of hardware, too.

Instead of a rugged, simple body-on-frame construction like the evergreen Wrangler and current Cherokee, the new model will be based on an enlarged and uprated version of the Alfa Romeo Giulietta’s platform that underpins the Dodge Dart in the US.

It's likely to use the 2.0-litre four-cylinder engines from the Dart, with the 1.75-litre turbo petrol and 2.0 JDTM diesel being obvious fits from the Alfa line-up.

In the US, the Cherokee will come with a V6 petrol engine and nine-speed auto gearbox. This box is likely to be offered in the UK, too, along with a six-speed manual. The Cherokee will also be available with a choice of two and four-wheel drive, in line with the smaller Compass.

However, despite being built on a new platform, the Cherokee will still have impressive off-road ability, thanks to its high ground clearance and underbody protection.