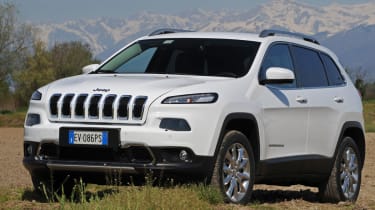 As well as wanting the new Cherokee to compete with the likes of the Nissan Qashqai and the Volkswagen Tiguan, Jeep's parent company Chrysler has priced it from £25,000 - this means it's expecting the Cherokee to also go up against premium SUVs like BMW X3 and Audi Q5.

While it may not have the same badge appeal, the Cherokee has got some pretty brave styling and Jeep is promising us it's made big improvements to the cabin quality.

Because this is a pretty new car, we haven't really seen much of its interior yet - there are quite a few nice chunky switches, so it feels quite Jeep-like and the quality is pretty good.

Top-spec Limited models get a soft-touch dashboard with contrasting stitching, and there's also a big 8.4-inch colour touchscreen in the middle, as well as a seven-inch colour screen in the instrument cluster.

However, certain materials such as the surround for the gear-lever look a bit cheap and tacky. The plastic on the lower dash is also pretty scratchy and hard, as is the transmission tunnel.

Because it's a Jeep, this new Cherokee should be the best in its class off-road. However, the engineers told us they've worked hard on the on-road dynamics too as that's where it'll mostly be used.

Buyers of the regular Jeep Cherokee can choose from either a two-wheel-drive or two slightly less capable four-wheel-drive systems. In all likelihood though, buyers will most likely opt for the 2.0-litre diesel.

The Cherokee is available with either 170 or 140bhp, with the most powerful being mated to a 9-speed automatic gearbox, which is okay - the gearbox works really well and the engine has enough torque.

The Jeep Cherokee goes from 0-62mph in just over 10 seconds and while there are some nice smooth shifts from the gearbox, there are some issues with the engine's refinement. It's fine at cruising speed, but when trying to use all of its performance, the gearbox kicks down a couple of gears, and then it sounds quite rough towards the top of the rev-range.

The Jeep Cherokee's ride is actually pretty good. It's nice and soft and it feels smooth over these bumpy roads, but when it comes to the handling, the steering is nicely weighted - it has a bit of heft to it, which is what you want from a Jeep.

Despite the weighty steering though, there's not all that much involvement, it kind of feels really numb and it leans slightly in the corners. In terms of this being a fun-to-drive or performance SUV, it doesn't really feel that brief.

The Jeep Cherokee is an SUV that's really capable off-road, pretty good on-road with a hi-tech cabin. What's more, Euro NCAP named it the safest car in its class last year - that's a pretty long and impressive list of talents, but then the Cherokee goes up against some seriously talented rivals.

The good news is, is that it's no longer as far adrift from those rivals as it previously has been. It's not best in class, but it is at least an unusual alternative to the Nissan Qashqai and Volkswagen Tiguan - and that's something we haven't been able to say about a Cherokee for quite a long time.