The third-generation Kia Forte takes heavy inspiration from its big brother the Stinger, and features a suite of advanced driver aids 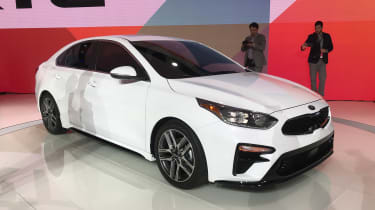 Kia has unveiled its third-generation US-exclusive Forte compact saloon at this year’s Detroit Motor Show. The car will enter the American market in 2019.

The Mk3 Forte appears to be heavily influenced by the Kia Stinger four-door coupe, which you can purchase in the UK. The Forte’s front grille is almost identical to its Stinger counterpart while sporty wheels compliment the aggressive front end and a pair of exhausts sit beneath the rear bumper. The back end is more restrained than the front, more akin to the rear of the Optima saloon. 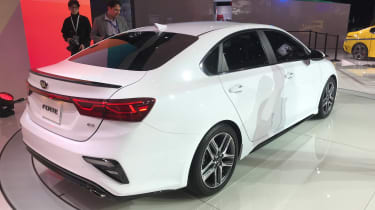 Under the bonnet is a 2.0-litre four-cylinder petrol engine that produces 145bhp and 179Nm of torque. It can be mated to either a six-speed manual gearbox or Kia’s new Intelligent Variable Transmission (IVT).

The new Forte has been lengthened by 81mm for added space inside and gains 13mm extra headroom compared to the mk2 car. An eight-inch infotainment screen sits atop the centre console, which is compatible with Bluetooth, Apple CarPlay and Android Auto. Wireless smartphone charging is an option, as is a 320-watt Harman Kardon sound system.

Would you like the see the Kia Forte sold in the UK? Join the debate below…