Kia has revealed a brand new logo as part of a wide-ranging rebranding exercise that will see the previously budget-oriented Korean marque sell itself to car buyers as more aspirational and a leader in automotive technology.

The big scale revamp of the entire brand is part of the company’s ‘Plan S’ restructuring strategy revealed in 2020, which will see the company produce 11 different fully electric models by 2025.

Ditching the oval logo of old, the new badge is supposed to conjure up thoughts of ‘symmetry and rhythm,’ being a heavily stylised take on the Kia name.

The company is also ditching its old ‘The Power to Surprise’ slogan in favour of a less humble motto: ‘Movement that inspires.’

The reveal of the new logo will be swiftly followed by a tangible demonstration of what Kia’s new brand image is all about on 15 January, when it will reveal how its new ethos will apply to future models.

In 2021, the brand will launch a flagship electric car that will be a sleek coupe-SUV using an all new platform called E-GMP. Internally, the model is known as the Kia CV, and it will have “around 300 miles” of range and offer a “sub-20-minute recharge time,” while the very fastest version of the brand’s incoming halo car will do 0-62mph in under three seconds.

What do you think of Kia's new logo? Let us know in the comments section below... 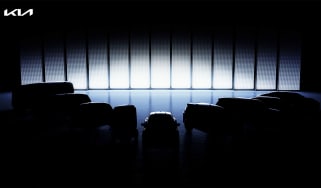 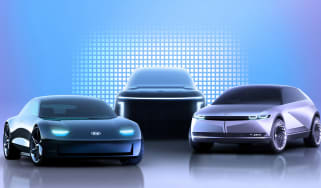 Hyundai has released a detailed specification for its new E-GMP architecture, which will underpin 23 new electric cars by 2025
New flagship Kia electric coupe-SUV spotted ahead of 2021 launch