The Kia Cee'd is the firm's Ford Focus rival, and it's solidly built, spacious and well priced 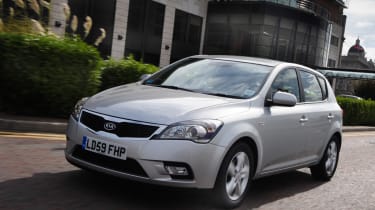 The Kia Cee'd is a strong contender in a highly competative segment. It undercuts class-leaders like the Ford Focus and VW Golf on price, which is always a good start, but lacks a certain fun factor from behind the wheel. Still, the styling is crisp and the cabin feels well screwed together. A wide choice of engines is available with the diesel models returning more than 60mpg.

The Cee'd drives much like its sharp but sensible styling suggests. The suspension, tuned by Lotus, is comfortable but resists body roll in the bends well, and while the steering could do with more feedback it grips well in corners and feels slightly sportier than its sister car, the Hyundai i30. Ultimately though it can't match the VW Golf and Ford Focus for driving pleasure. There's a choice of 89bhp 1.4 and 124bhp 1.6-litre petrol engines, plus a 1.6-litre diesel with either 89bhp or 113bhp. All engines lack a little refinement when pushed hard, but we'd go for the 89bhp 1.6 CRDi EcoDynamics model which accelerates strongly but returns 67.3mpg thanks to stop-start, low rolling resistance tyres and a long ratio gearbox.

At almost £2,000 less than the equivalent VW Golf, the Kia Cee'd is a good value choice, plus cheap insurance premiums should keep running costs low. However, it will depreciate faster than more premium rivals. The 1.4-litre petrol engine offers 48.9mpg compared to the 46.3mpg of the 1.6-litre, but both will cost notably more than the diesels in road tax. Entry level 1 models can be a little basic inside, with wind-up windows, so we'd recommend at least a mid-spec 2 model.

A facelift at the end of 2009 brought a crisper look for the Kia Cee'd. A striking new grille, which has since been applied to other models in the line-up, and reshaped headlamps give the front-end a low and wide look, while the taillight clusters are designed to mimic more expensive LED lights. As well as the more practical five-door model shown here a stylish three-door version, known as the Kia Pro_Cee'd, is also available. Barring a few scratchy plastics, the interior is on a par with more expensive European rivals like the Vauxhall Astra and VW Golf. High-gloss black trim and a rearranged dashboard were introduced during the 2009 updates, and help give the Cee'd's interior a reassuringly solid and premium feel.

Lots of leg and headroom in the back make the Cee'd a comfortable place for passengers. The 340-litre boot – which expands to 1,300-litres with the rear seats folded flat – is roughly on a par with its rivals, but the low-slung floor means there's a high lip to negotiate when loading large objects. A box between the front seats provides more useful storage space, while an air-conditioned glove box, fitted as standard to all models, is ideal for keeping drinks chilled in the summer.

Buyers needn't worry about the reliability of a Cee'd - it came 26th overall for reliability in our 2010 Driver Power survey and improved on that position in 2011 by finishing 22nd in the same category. It has a five-star rating from Euro NCAP for adult protection and four stars for child protection, while six airbags, Isofix child seat mountings and anti-lock brakes are standard. Our only gripe is that electronic stability control is only an option on all but the top-spec Cee’d 3.