To say Kia designers have been busy is an understatement. The company's range already includes the stylish Picanto city car and Cerato family hatchback, as well as the capable Sportage and Sorento SUVs - but there is more to come. 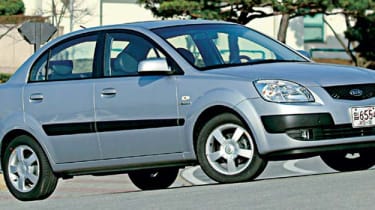 If you aren't concerned about having the most stylish supermini on your drive, the Rio could be for you. It does everything most buyers will ask of it, and promises to be a bargain. Add the Korean firm's attractive finance deals, and the new model is a tempting budget choice. We look forward to seeing how the car will fare in Britain.

To say Kia designers have been busy is an understatement. The company's range already includes the stylish Picanto city car and Cerato family hatchback, as well as the capable Sportage and Sorento SUVs - but there is more to come.

Next in the expanding product plan is the new Rio, and Auto Express has driven one of the first to roll off the production line to make sure bosses aren't concentrating on quantity rather than quality.

Badged Pride in its native South Korea, the four-door Rio seen here looks neat, if a little uninspiring, although it is a vast improvement over its predecessor. The newcomer is taller and wider but shorter, which gives it balanced proportions. It lacks the Picanto's dis-tinctive styling, but is not likely to put anyone off with its inoffensive face.

The Rio's cabin feels solid, and is built from decent materials. Versions sold in the UK will feature different trim from the car pictured here, but the smart design will remain largely unchanged. Taking inspiration from the Sportage, the Rio has an upright dashboard and a distinctive centre console. With a long wheelbase and short front and rear overhangs, the supermini is well packaged and has plenty of space front and rear.

Where the previous Rio fell behind the competition was on the road. Its replacement is no handling masterpiece, but the new chassis is more capable, with excellent roadholding and direct steering. Following a winding road is no longer a chore, as the Kia resists body roll well.

The Rio is available with three powerplants - 1.4 or 1.6-litre petrol units or a 1.5-litre diesel. Our test car came with the higher-powered petrol motor, which produces 110bhp, thanks to its variable valve timing.

Unfortunately, with peak power not available until 6,000rpm and maximum torque arriving at a heady 4,500rpm, the engine has to be revved to make good progress. As a result, in relaxed everyday driving it can feel sluggish. Buyers have the choice of four-speed auto or five-speed manual transmissions, with the 1.6-litre manual likely to appeal to most UK buyers. The Rio is not due on sale in Britain until September, so the firm is still tight-lipped about prices and specs. However, all three engine variants will be imported in three and five-door bodystyles, and entry-level models are likely to cost around £8,000.

Expect lots of tempting finance deals, too, as Kia is keen to continue the success of its £1 deposit promotion. Equipment is likely to better rivals, with an advanced safety system, including six airbags, fitted as standard. It all adds up to the firm's strongest supermini package yet, and one that will provide tougher opposition to mainstream rivals.