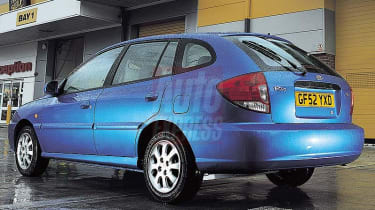 The Kia Rio is famous in the US for a good reason - its 10-year, 100,000-mile warranty. On such a cheap car, that's remarkable - sadly, it was slashed to three years and 60,000 when the car launched in the UK in July 2001. Here the emphasis was on 'Focus size for Fiesta money', with a £5,995 list price undercutting the competition. Engineering was basic and equipment sparse. The entry model lacked power-steering, a stereo, even a rear window wiper - and only came in one colour, Cherry Red. Costlier models were much better equipped, but more expensive and so the range-topping 1.5-litre SE variant is rare. Most common are 1.3-litre L and LX versions. Such a long warranty in America suggests the Rio is a tough cookie. For those who want a nearly new car for very little cash, base 2001 models will appeal, as entry-level cars can be as cheap as £3,000. Even compared to a same-age Fiesta, that's a bargain.Checklist * Interior: many of the early models suffered from trim fit problems. Also, watch out for broken plastics - some are flimsy and can't withstand constant hard use. * Engine: a number of 1.3-litre cars were fitted with a faulty batch of cam seals. A recall was issued, which the company should still honour if you're doubtful. * ABS: isolated fault with ABS brakes can cause reduced braking at slower speeds. This is very rare, but again Kia will honour any faults under warranty. * Bumper: the body-coloured bumpers can scuff easily and are expensive to repair. Some owners fit rubbing strips, which can look unsightly and also damage paint. * Brakes: there have been reports of ex-cessive brake wear, so check the front disc thickness and look out for dash warning lights indicating any excessive use. Pedal should feel firm.Driving impressions The driving position in the Rio isn't bad, but the horrible rubbery gearshift and vague clutch do not appeal in the slightest. The controls are easy to op-erate, but unattractive to look at, and shapeless, soft seats bite on long journeys. Ride quality is restless, and while the handling is safe, the Rio offers zero feedback and a lot of body roll. The biggest gripe concerns engines. Both are noisy, flat, and lack outright power. Not a great showing, then, but can you complain at the prices?Glass's View The Rio is a good, honest budget car that's reliable and worth considering if you're on a budget. However, it does get overlooked by those looking for something cheap. It also tends to struggle outside the dealer network, but with Kia on the up and up lately, it should start to get more recognition in the trade. The base-spec L is good value new, but as a second-hand buy it can be difficult to move on because most used buyers like good standard equipment levels. Jeff Paterson, senior editor, Glass's Guide Life With A Rio My Rio is incredible value for money and so spacious. I can't wait for the new Picanto to be launched, as I'll definitely be buying another Kia. Lynda Copp, Northampton The best thing you can say about the Rio is that it 'does the job'. I do a lot of night driving, so I need a reliable car. As I have three children, everything else in my budget was too small. Neil Slynn, Warrington, Cheshire

More distinctive than many of its Kia stablemates, the five-door Rio has a strong European flavour to its looks and is larger than hatchback rivals from the likes of Citroen and Daewoo. the Rio may not be great to drive, but it offers plenty of value for money and is capable of getting you from A to B in comfort and a fair amount of style. Dynamically, there are much better cars for the money, but they're smaller and less well equipped.