On paper the Sorento's a good proposition. On the road, though, the driving experience feels dated 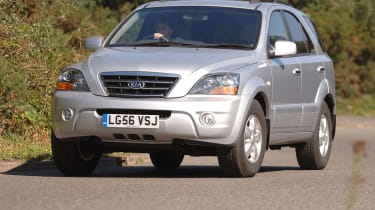 On paper, the Kia Sorento looks like a decent proposition. It has upmarket styling, a practical cabin and is competitively priced. On the road, however, the driving experience feels extremely dated. We would recommend prospective buyers take a test drive in one before buying.

And it is making some big claims about the 2.5-litre machine. But if the company is being bullish about its latest SUV, it has every right – on paper, the full-sized 4x4 looks tempting. Claimed economy is a frugal 35.8mpg, which is better than virtually all its rivals.

There’s no escaping that it looks similar to the previous-generation Mercedes M-Class, and at first glance, the Sorento appears upmarket and well built. Priced from £19,995, it promises plenty of value for money, although flagship models are more expensive, at £26,095.

Inside, there’s bags of room, but the bland fabrics and brittle plastics fail to build on the quality exterior. There’s a commanding view of the road, though, and practicality is first-rate. So far, so good, but as you fire up the new 2.5-litre four-cylinder diesel, you can’t help but feel that Kia has made a mistake.

The new powerplant is being touted as one of the Sorento’s key improvements. The 168bhp unit has variable turbo geometry, plus 21 per cent more power and 25 per cent extra torque over the old diesel, with 392Nm on tap from 2,000rpm. But at idle the oil-burner is noisy and unresponsive. In-gear acceleration is disappointing, the long gearshifts spoil any sense of involvement, while the damping and steering feedback are poor. Granted, a large SUV is unlikely to handle like a sports car or ride like a limo, but the Sorento’s vague steering and crashy ride belong to another era. This is made more frustrating by the fact that sister firm Hyundai’s impressive Santa Fe shows just what’s possible from a Korean company.

But does this spell the end for the Sorento? Sales figures suggest not, with registrations climb­ing by 10 per cent in 2005. By sticking to its tried and tested value-for-money formula, Kia is sure to see this figure rise further.