The Kia Sorento is the firm's largest model, and has plenty of appeal as a seven-seat 4x4

The Kia Sorento is a 7-seater SUV sharing many parts with the Hyundai Santa Fe and rivalling the likes of the Mitsubishi Outlander. It's a commendable option for those seeking a spacious, well-equipped and practical family SUV with decent build quality and a reasonable price - starting at around £27,000 for the entry-level model.

The Sorento range consists of KX-1, KX-2, KX-3 and KX-4 models, all of which are powered by a 2.2-litre CRDi diesel engine. Four-wheel drive is standard across the range, with a manual gearbox available only in KX-1 and KX-2 models. Automatic 'boxes are available from KX-2 upwards.

A big selling point of the Kia Sorento is the headline-grabbing seven-year/100,000-mile warranty which gives potential buyers peace of mind for the future.

The Sorento isn't the most thrilling car to drive, thanks to a lack of steering feel and heavy weight, but the suspension makes for a comfortable ride and the engine is powerful with 191bhp and 422Nm of torque. The interior may be a slightly uninspiring place to be, but there's not a lot wrong with it and there's plenty of room for most.

The Sorento is a big car, but it is well suited to what buyers will be looking for - a practical, spacious car that can be depended on.

While there's only one choice of engine in the Kia Sorento - a 191bhp 2.2-litre CRDi diesel, it's a torquey and powerful unit which goes some way to make up for the lack of choice. A six-speed manual or automatic gearbox is available and the Sorento is capable of cracking 0-62mph in around nine seconds which is respectable for a large SUV. 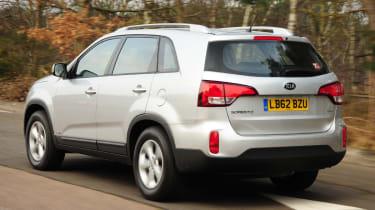 The way the Kia Sorento drives is hardly nimble, due to soft suspension compromising cornering ability and agility. The steering is short of feel and is quite light, but the car is very comfortable and body roll is no worse than that found in other tall 4x4s.

All models of the Kia Sorento range come with permanent four-wheel drive, and while its 4WD lock helps it on rough ground, there's no hill descent control and it's not as capable as a Mitsubishi Outlander in the rough stuff.

The permanent four-wheel drive found on the Kia Sorento hurts fuel economy and with a manual gearbox, it'll return 47.9mpg on a combined cycle, plus CO2 emissions of 175g/km.

The entry-level Kia Sorento KX-1 model gets 17-inch alloy wheels as standard, plus air-conditioning and parking sensors. The mid-range KX-2 gets cruise control, leather seats and a reversing camera, while KX-2 Nav models get touchscreen sat-nav.

These models, we believe, represent much better value than the Mitsubishi Outlander. The flagship Kia Sorento models, the KX-3 and KX-4, get start/stop technology and alloy pedals as part of the deal, but they weigh in at over the £30,000 mark.

The look of the Sorento has been designed more with practicality in mind as opposed to show-stopping looks, but it is a simple, inoffensive and rugged design that sets it apart from sister-car the Hyundai Santa Fe. It carries the familiar Kia family face, with the recognisable 'tiger-nose' grille and swept back headlight design.

This approach to the styling has been carried over to the interior, with an easy-to-use, functional layout. The dark colours may be a bit dour for some, though, and the Hyundai's interior is a much more attractive place to be.

The Kia Sorento received a facelift in 2012 with tweaks to the exterior styling and interior. Kia managed to free up some space on the inside, making it more spacious than the Hyundai Santa Fe. The third row of seats is still only suitable for children or for use on short journeys, though. There's decent headroom and the seats fold down easily via a release in the boot. 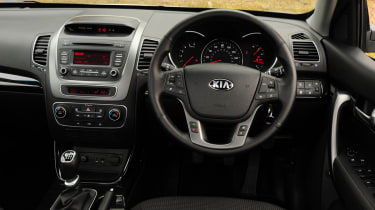 It should come as no surprise to find the Sorento is a practical car. With the rear seats in place, boot space is 116 litres, but when they are folded this increases to 1,530 litres. The 2,500kg towing capacity is extremely useful for those looking to tow regularly, as this is a popular tow car.

The Sorento isn't as good off-road as some of its rivals, so the Sorento may not be the best choice for those looking to head off the beaten track on a regular basis.

The Kia Sorento scored the maximum five-stars in the Euro NCAP crash tests, and every model gets six-airbags, stability control and brake force distribution tech as standard.

Kia also gives the Sorento a seven-year warranty, which indicates the level of confidence Kia has in its reliability. If anything does go wrong, the excellent warranty should have it covered, too.