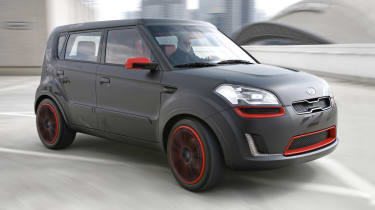 The Soul is the first big step in Kia’s plan to become a desirable brand. With distinctive looks, a versatile interior and decent driving dynamics, it’s heading in the right direction. By offering the sort of customisation that has so far been reserved for the MINI and Fiat 500, Kia intends the Soul to appeal to people who appreciate something a little different. Based on the evidence of this concept, the company is well on target.

Are you ready for Kia to bare its Soul? Having built up a reputation for producing cars that are dependable, practical and great value for money, the fast-growing Korean brand is now set to turn on the style with this daring SUV-inspired supermini.

The Soul was unveiled at the Geneva Motor Show last month as three distinctive variants, each demonstrating the potential for personalisation that the production model will offer when it goes on sale in 2009.

The cars are called Burner, Searcher and Diva, and each has a head-turning colour scheme and highly customised interior.

When the wraps were pulled off the three models on the stand at the Swiss exhibition, the Burner caught our eye in particular. So we went to Kia’s European headquarters in Frankfurt, Germany, for an exclusive first drive. Walking up to the Soul, it’s instantly clear that it doesn’t quite fit into the traditional supermini class. With its tall stance, upright rear and slightly raised ride height, it stands out from every other small car.

Look closer and you will spot the bulging wheelarches, sloping roofline and distinctive side window profile. To that, the Burner adds deep bumpers and matt-black paintwork, as well as red accents on the front grille, door mirrors, front indicator lenses and chunky 19-inch alloy wheels.

And to complete the ‘bad boy look’, a subtle, tattoo-style dragon graphic stretches asymmetrically down both sides of the vehicle.

The best news for buyers, though, is that apart from the special bum-pers and tweaked front and rear lamps, this is the car you will see in Kia’s UK showrooms next year.

All the sheet metal parts – such as the doors, wings and roof – have been signed off for production. And it’s a similar story on the inside of the Burner. Under the bold black and red leather trim lies the same cockpit the factory model will have.

The dashboard is well laid out, and the stereo and heating controls are mounted high in the centre console. There’s plenty of room for the four occupants – at 4,105mm long, the Soul is slightly bigger than supermini rivals. Neat touches inside include universal iPod connection, along with some clever storage ideas.

That’s not all. Turn on the sound system, and LEDs positioned behind the speaker grilles pulse to the beat of the music. But this is no concept car gimmick – the hi-tech feature will be offered as an optional extra!

The Soul is based on Kia’s all-new small car platform, which will also form the basis of a supermini-MPV, as well as the next-generation Rio. And although the model wasn’t in its final state of tune when we tried it, there is plenty of potential. The ride is composed, and the handling is agile, with precise and well weighted steering. Enhancing the driving experience is a high-set seating position and upright windscreen, which combine to give excellent visibility.

Buyers will get a choice of four engines: this comprises 1.6-litre petrol and diesel powerplants carried over from the Cee’d hatchback line-up, as well as new 1.4-litre petrol and oil-burning units. They will be linked to either five-speed manual or automatic transmissions.

Although prices have yet to be announced, Kia is keen to maintain its value-for-money reputation. And with the possibility for extensive customisation, there should be a version of the Soul to suit just about every taste and budget. Plus, there is the class-leading seven-year warranty to add into the equation.