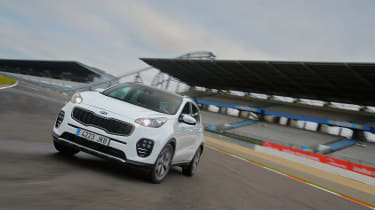 Kia is continuing its convincing charge upmarket. The new Sportage takes the successful recipe from the seven-seat Sorento and scales it down into a smart, high-quality and spacious compact crossover. The news isn't all positive, because prices have risen slightly, but for the relatively small increase, you're actually getting a much more talented and capable car. This early drive showed that the Sportage has great promise, so we look forward to driving it in UK spec very soon.

The previous Kia Sportage stormed the crossover sector, stealing sales from other brand's offerings thanks to its chunky looks and solid stance. Instantly, it turned Kia into a genuine contender against rivals such as Ford, Mazda and Nissan.

It was a massive leap in terms of quality and refinement, too. Kia promises that the new car will refine the formula to the next level, even though it admits at as it has moved into the mainstream, teh gains on each subsequent model won't be so great. We headed to the brand's testing centre at the Nurburging in Germany to get a taste of what it's like to drive.

The answer is good. We sampled both the 1.6-litre T-GDI turbo petrol, which had Kia's latest seven-speed dual-clutch auto, as well as the 2.0-litre turbodiesel with a six-speed manual, and it's the latter we're focusing on here. 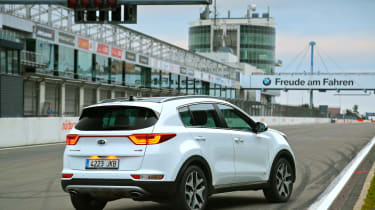 It's eager to whisk the Sportage along on a smoothly delivered surge of torque, so there's lots of accessible performance. Autobahn overtakes were easy, thanks to the decent in-gear performance, and on country roads the flexible engine kept everything relaxed. Wind, engine and road noise were all nicely filtered out, too.

The Sportage's high-riding chassis doesn't exactly devour corners, but it provides a comfortable trade-off between sportiness and comfort. It's one of the better drivers' cars in the crossover class, with sweet steering, a light but positive manual gearshift that matches the engine's calm power delivery and decent pace.

There's a good amount of grip, and the intelligent four-wheel-drive system fitted to our test car means you won't have to worry too much when the conditions become slippery. It doesn't hit efficiency too hard either, as most of the time the transmission sends power to only the front wheels. It'll divert up to 40 per cent to the rear axle when it senses extra traction is needed. 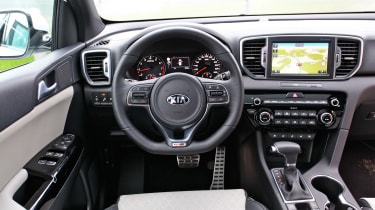 We drove a GT Line model that was loaded with kit, and while UK equipment specifications haven't yet been confirmed (the range will include KX-1 to KX-4 trim levels, as well as the new GT Line version we tried), features such as sat-nav, heated seats and steering wheel, autonomous braking, connected services, leather and a reversing camera are all on offer, depending on the model.

The Sportage effectively takes the seven-seat Sorento's formula and downsizes it for the mid-size market - and it's just as good, with an interior that scores on comfort, quality and space. 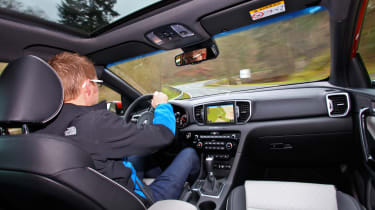 It's only slightly longer than before, but a longer wheelbase gives more space inside. Legroom in the back is good, while the boot is bigger and more practical than the old car's - plus the awkward loading lip has been reduced.

The smarter cabin, better performance, stronger efficiency and extra practicality over its predecessor all come at a price, though - the entry level Sportage now costs £17,995, or around £500 more than before. However, it still comes with Kia's seven-year warranty, which gives it a real edge.