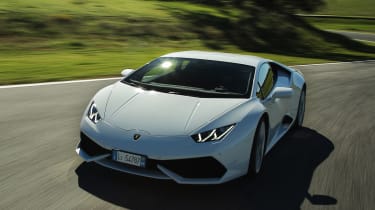 The new Lamborghini Huracan has a big task on its hands. Not only must it beat the Ferrari 458 Italia and the McLaren 650S, it also needs to outperform the Lamborghini Gallardo - the car it replaced - in the showroom. Over its 10-year career, the Gallardo was Lamborghini's best-ever selling model ever, with 14,000 sold.

The Lamborghini Huracan gets off to the best possible start. Perhaps the design is a little conservative by Lamborghini standards, but in the flesh, the aggressive proportions, aggressive front end and floating C-Pillar push all the right buttons.

Like in the Lamborghini Aventador, the interior of the Lamborghini Huracan pays homage to fighter jets. There's a flip-up ignition switch, angles everywhere and a new cockpit-like 12.3-inch digital instrument display behind the wheel that can be configured in a variety of ways.

The Lamborghini Huracan also gets a whole range of brand-new technologies.

For starters, the Lamborghini Huracan gets a new chassis, which is made from a combination of aluminium and carbon fibre. This makes the Huracan not only 10 per cent lighter than the Gallardo, but also 50 per cent stiffer.

There are also new three-stage adaptive dampers, as well as a variable ratio electro-mechanical steering system that varies the ratio on how quick you're driving.

The Lamborghini Hurican has an electronically controlled four-wheel drive system can send up to 70 per cent of the power to its rear-wheels in normal driving, and up to 100 per cent when you really need it.

Most importantly on the new Lamborghini Huracan, though, is a new, seven-speed twin-clutch box that shouldn't feel like you're getting kicked in the head every time you change gear.

Rather than downsizing or turbocharging, Lamborghini has stuck to its guns by using a developed version of the Gallardo's naturally aspirated 5.2-litre V10.

The Lamborghini Huracan gets stop-start and a few other tweaks to make it a little bit cleaner, but most importantly, it's now got 602bhp and 560Nm of torque. It'll do 0-60 in 3.2 seconds and it has a top-speed of 202mph.

The Lamborghini Huracan's acceleration is pretty vivid. Perhaps it doesn't quite have the free-revving nature of a Ferrari 458 or the turbocharged hit of a McLaren 650S, but it's definitely lost none of the aural drama that the Gallardo had.

The biggest change here with the Lamborghini Huracan, though, is its breadth of abilities.

Lamborghini has fitted something called the 'Anima' switch to the Huracan, meaning it has three driving modes. In 'Strada' mode, it softens the suspension and dials back the ferocity of the steering, the gearbox and the throttle. 'Sport' mode is somewhat of an interim mode and it's pretty good for fast-driving on road. But since we tested the Lamborghini Huracan at the amazing Ascari circuit in Spain, it would have been a shame if we didn't go for the full-fat 'Corsa' mode.

Fling the Lamborghini Huracan into a corner and the steering is quite light, but absolutely pin-sharp. In terms of feel, it's a bit like a Ferrari 458 and you can feel the variable ratio really helping you out, meaning there's no full-opposite lock.

The carbon ceramic brakes on the Lamborghini Huracan are standard-fit now, and they're absolutely brutal in the way they stop the car.

The Lamborghini has a four-wheel drive system, which means there's tonnes of grip. However, if you provoke the Huracan a bit, you can get it to act a bit like a rear-wheel drive car.

Perhaps the Lamborghini Huracan isn't as lairy as the Gallardo used to be - that used to like to gets its tail out at the slightest provocation - but you can still have some fun with it and feel it moving underneath you. What's more, the technology Lamborghini used in the Huracan can also make a pretty average driver look pretty spectacular.

The question is though, is do you actually want a Lamborghini that flatters you and covers up all your driving mistakes? Some will say that a Lamborghini should scare the life out of you and your passenger. Then it should spit you into a hedge when you're not at the top of your game.

But, we'd disagree because the new Lamborghini Huracan is a glorious fusion of modern electronics and old-school theatrics.

If you want something that drives like a pig and breaks-down every five minutes, you can always take your £186,000 and spend it on something from Lamborghini's back catalogue.