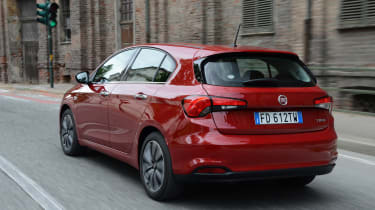 With its deafening, naturally-aspirated V10, the Huracan has an old-school supercar charm compared to its turbocharged rivals, but it’s by no means low tech. The dual clutch gearbox and non-variable ratio steering mean its smooth and predictable to drive in any situation, while the adaptive suspension is surprisingly comfortable even at low speeds. The problem is, while rivals are starting to move the game on the Huracan feels like more of the same.

Since the Lamborghini Huracan launched this time last year, the supercar landscape has shifted. Ferrari has switched to a turbocharged V8 in its new 488 GTB, while the new Audi R8 (the Huracan’s sister car) has been revealed, offering the same 602bhp from the same 5.2-litre V10 as the Lambo, but for £43,220 less.

The question is then, does the baby Lambo still cut it in a rapidly evolving supercar class, or is it already being left behind by more technically-advanced and affordable rivals? To find out we drove one without the optional variable ratio steering system for the first time – one of our few criticisms from previous encounters.

Immediately the steering feels better - cleaner, crisper and more predictable in its responses. You might have to cross your hands or feed the wheel through them in tighter corners, unlike with the variable ratio system that dials up the ratio at lower speeds, but its worth it for the way it makes the shovel-like nose easier to place on the road.

Our other gripes included the somewhat understated styling – well, for a Lamborghini at least – and the tendency to understeer on the limit. Viewed in isolation, and driven on a track, those two points still hold true, but venture out on public roads and the Huracan still inspires shock and awe wherever it goes – especially painted in ‘Verde Mantis’ – and has a turn of pace to keep anything McLaren, Ferrari and Audi can produce honest. 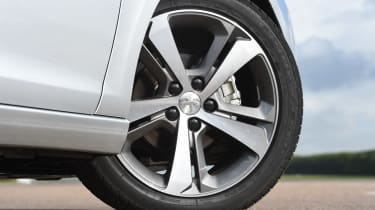 In fact, that’s doing it a disservice, because with no turbochargers to spool up and 75 per cent of maximum torque available from just 1,000rpm, the way it responds to your right foot is now sharper than anything in the class. Flick the ANIMA switch on the wheel from Strada to either Sport or Corsa, let it rev, and the booming crescendo it a notch louder than its rivals, too, with an outbreak of gunfire from the exhaust on the overrun for good measure.

Because you can’t use its full performance repertoire on public roads, understeer and oversteer aren’t part of the equation - it simply grips and goes. However ham-fisted you are with the steering, or whenever you mash the brakes or throttle, it just digs in and retains stability and composure at all times. 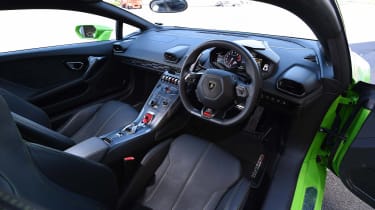 There was a time when Lamborghinis were intimidating, hairy-chested things that were as challenging to drive as they were to look at, but the most remarkable thing about the Huracan is how far it has come from those roots. Visibility isn't great, even out the front, and build quality isn't quite what you'd expect from a £180,000 car despite some great design flourishes in the cabin, but compared to Lamborghinis of old, usability is off the scale.

The addition of a dual-clutch gearbox means shifts are virtually imperceptible, unless you select Corsa mode, where the engineers have engineered in a jolt with every upshift for a more visceral feel.

Keep the adaptive dampers in their softest ‘Strada’ setting and it’s comfortable enough to be driven every day – certainly less punishing than a Ferrari 488 GTB. You can even order it with a front axle lifting system (£4,290 when bundled together with adaptive dampers) to help you navigate speed bumps without removing the front bumper. A Lamborghini that lets you drive it more often – now that can’t be a bad thing.