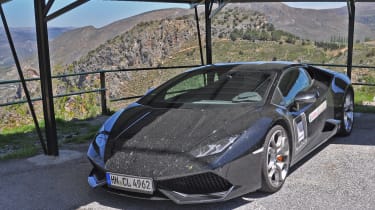 The Lamborghini Huracan is already a pretty impressive piece of kit, but it seems Lambo is already developing an even hotter version. Likely to mark a return of the 'Superleggera' nameplate, it will be lighter and the 5.2-litre V10 should become more powerful than ever.

With the Huracan's forthcoming Audi R8 V10 Plus sibling offering the same engine and power as the standard Huracan for less money, Lambo is determined not to be outdone. The newly turbocharged Ferrari 488 GTB is also on the horizon with a whopping 661bhp.

Although this disguised Lamborghini test mule keeps its cards close to its chest, there are clues hinting at the extra performance on offer. The most obvious signs are at the back, where a new pair of tailpipes sit behind a mesh grille above the standard quad items below. 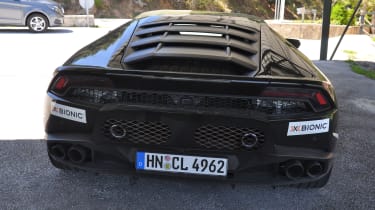 We doubt Lambo is planning to go overboard with a full six exhausts (although we wouldn't put it past them), as the top ones appear almost identical to those found on the Huracan GT3 car. We suspect the lower items, found on the regular Huracan, are fakes to throw photographers off the scent.

Also evident are slightly bigger brakes than the standard Huracan and racing-style sponsor stickers that are an obvious nod to Lambo's current motorsport heritage. We can also expect carbon-fibre exterior features and a more prominent rear wing to appear on the production car.

As far as power is concerned, a small increase in a similar vein to the last Superleggera model, the Gallardo LP 570-4 in 2013,  is likely. Anything up to 650bhp is possible from the naturally-aspirated V10 to take the fight to the Ferrari 488GTB.

But the focus will be on weight-saving measures, with Lambo likely to use carbonfibre in the bodyshell and chassis to help bridge the 100kg gap between the Huracan and the Mclaren 650S. We'll know more about the Huracan Superleggera near its release sometime in 2016.

Now check out our round-up of the fastest cars in the world...