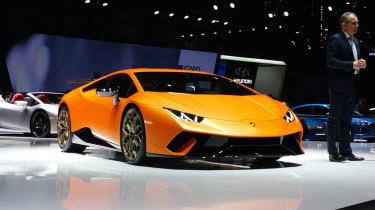 The Lamborghini Huracan Performante is a hotter new derivative of the Italian supercar brand’s V10 powered Huracan, and is the latest lightweight, track honed Lambo. Revealed in the metal at this year’s Geneva Motor Show, the Huracan Performante picks up where the Gallardo Superleggera left off.

Lamborghini caught the headlines with its new lightweight Huracan last week when it revealed a Nurburgring lap time of 6:52.01, besting the Porsche 918 and setting a new production car lap record. That eyecatching laptime has been achieved by making the Huracan not just lighter, but also more powerful. Aerodynamic tweaks play a key role too.

Thanks to a new carbon-fibre and aluminium construction, the Huracan Performante comes in 40kg lighter than the standard version of the supercar. It’s easy to spot some of the new aerodynamic appendages on the bodywork such as the large rear wing and diffuser, but the Performante has a trick up its sleeve – it features active aerodynamics in the form of moving flaps, for reduced drag on the straights and extra downforce when it’s needed in the corners. Extra cooling is achieved with some more vents in front of the engine and wheels, too. 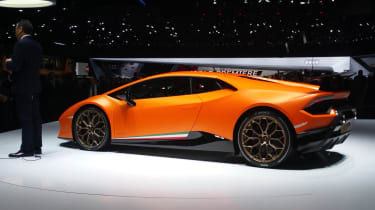 The engine has been tweaked to produce more power, with the naturally-aspirated V10 engine now producing 631bhp and 600Nm of torque - a relatively small boost over the standard car’s 602bhp.

The 0-62mph sprint takes just 2.9 seconds, which is quicker than the standard model’s 3.2-second time, but it can also go from 0-124mph in as little as 8.9 seconds. Top speed is in excess of 200mph, despite the downforce from the “Aerodinamica Lamborghini Attiva” (ALA) active aero. 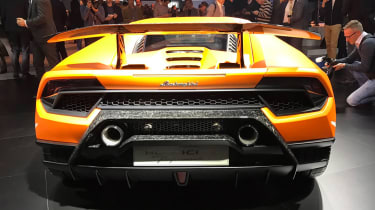 A revised suspension system with a stiffer set-up and a tuned four-wheel-drive system add to the high-performance track-focused ethos.

New 20-inch alloy wheels allow Lamborghini to use Pirelli’s P Zero Corsa tyres, although the lap record was set with the also-available Trofeo R tyres. Inside the Performante has plenty of Alcantara and carbon fibre trimmings, along with sports seats and a digital cockpit display to show info on the active aerodynamics and other performance data.

There’s even a Lamborghini Ad Personam Program that lets owners customise their car to their own taste - although with the base price being around £210,000 (Lamborghini lists £173,271 before tax), there will be a price to pay for that service.

Do you like the new Lamborghini Huracan Performante? Let us know in the comments section below...