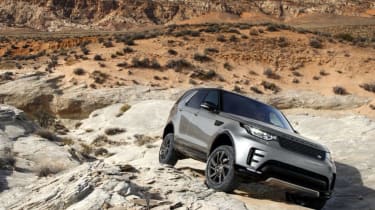 Land Rover has pumped £3.7 million into a project that will see autonomous driving technology developed for off-road use.

The British firm wants its autonomous vehicles to be the most capable on the market and able to tackle the widest range of terrains including off-road. Vehicles such as the Discovery and Discovery Sport will eventually be fitted with Level 4 and Level 5 autonomous technology, although no arrival date has been set.

JLR will use acoustic, video, radar, light detection and distance sensing to allow the car to create and accurate digital picture of its surroundings. Land Rover says machine learning will also allow its cars to behave in ‘increasingly sophisticated ways’ over time.

“It’s important that we develop our self-driving vehicles with the same capability and performance customers expect from all Jaguars and Land Rovers,” said Chris Holmes, Connected and Autonomous Vehicle Research Manager at Jaguar Land Rover.

The technology is being developed as part of a project called CORTEX, which was setup in March and jointly funded by government and the industry. The University of Birmingham will also play a role in the development of the autonomous technology focusing on research into radars and sensors.

Would you be interested in purchasing Jaguar Land Rover models such as the Discovery and Discovery Sport if they came equipped with autonomous off-road tech? Let us know in the comments below!