You don't often get to drive the car at the international reveal event, and never through a swimming pool... 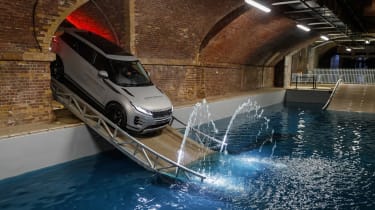 Driving through a swimming pool (yes, full of water) underneath shady railway arches in East London isn’t a usual first drive experience, but even so, our initial thoughts on the new Evoque are positive.

It wasn’t just the 500mm deep water we subjected the car to, though; we took the car and up and over an old railway carriage and at rather odd angles to prove what we expected – the Evoque is still pretty peerless over unusual terrain.

• Read the full story on the new Range Rover Evoque

Over our short test run, it’s hard to come to any firm conclusions – they’ll come nearer the car’s on sale date in the Spring next year – but what we can say is that back and forth over the cobbles and under the arches during our photography runs, the new car appeared to ride better than the car it replaces, while the interior noise levels seem to have been reduced, too. 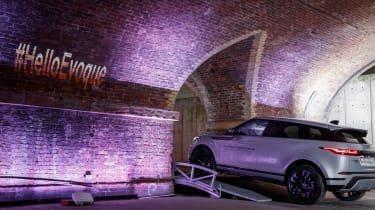 Our car featured the 178bhp diesel engine with the new mild hybrid system, which in our low speed off-road manoeuvring helped deliver more instant response, while the stop/start was less noticeable in its operation.

What is apparent behind the wheel is the improvements in quality, tech and space. The interior feels both better built and uses upgraded materials around the cabin, with our car featuring the novel non-leather Kvadrat premium cloth.

The ClearSight digital rear view mirror feels like a bit of a novelty, though. It might answer complaints from owners of the old car about poor rear visibility, but it lacks reference points to be a real help. Maybe living with it would make it feel like a bigger benefit. The ClearSight Ground View seemed more useful as we took the car up and onto rail tracks, allowing us to perfectly align the wheels on the tracks. If you’re likely to use your Evoque off-road, this is a gadget that will be well worth speccing. 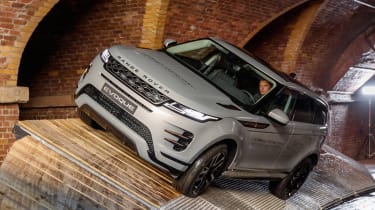 The extra space in the back and the boot are both a big boon, too. There’s more leg and shoulder room than before and we managed to sit a six-foot passenger behind the driver’s seat set for a six foot tall driver with space to spare. The enlarged luggage space makes a difference, too, making the new Evoque more of a complete family car than the old model.

The original Evoque was good enough to win the Auto Express Car of the Year trophy in 2011. The SUV world has moved on a long way since then, but judging by our first chance to climb all over the car and take it for a short drive, the new Evoque will certainly make life tough for the likes of the Audi Q3, BMW X3 and Volvo XC40.

Click here for all the details, pictures and video on the new Range Rover Evoque... 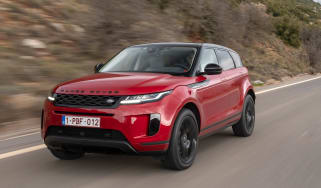