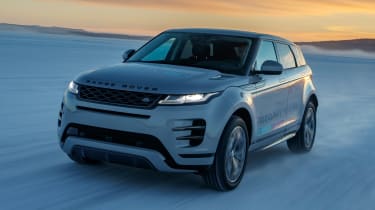 The new Range Rover Evoque has ambitious goals, especially for all-terrain capability and driver engagement. The news from a snowy Sweden is nothing but positive. It’s hard to imagine the UK’s worst weather will give owners any concern.

It’s -32 degrees Celsius outside, a dazzling yellow sun is clinging to the horizon and, dancing across Arjeplog’s vast frozen, snow-blanketed lake in Sweden, the new Range Rover Evoque is doing things that frankly beggar belief.

At least it is in the hands of Carl Richards, principal engineer responsible for the stability controls of the JaguarLand Rover group’s more space-efficient ‘mixed material’ Premium Transverse Architecture platform that underpins the Evoque. It’s his 21st winter in the frozen north.

All Mk2 Evoques are powered at the car’s launch by JLR’s 2.0-litre Ingenium engines, in both diesel and petrol guises. We’re in the all-wheel-drive 296bhp turbo petrol range-topper with nine-speed ZF auto box, a car capable of accelerating from 0-60mph in 6.3 seconds on the way to a top speed of 150mph. 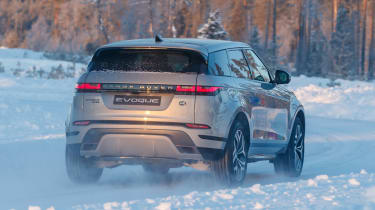 What’s even more remarkable is Richards’ inch-perfect sideways-on-demand precision on the frozen lake. Initially, it’s hard to take in as electronics and algorithms actively juggle torque, traction and braking across all four wheels so that it’s the steering alone that determines the direction of travel irrespective of throttle position, even if it’s pinned to the floor.

“Just point the wheel where you want to go and trust the system to get you round,” says Richards, as we feed the car into a tightening left-hander, our right foot counter-intuitively flat to the floor, the system’s understeer control resisting the plough-on momentum and coaxing the nose towards and past the apex.

The way the car crawls up and eases down Arjeplog’s 28 per cent incline is almost uncanny. “This is one of our worst-case tests,” Richards says. “There’s a massive interaction of traction control on that front right wheel. When it starts to spin, the system identifies the surface and instantly caps the engine torque to an optimum level, while transferring it across the front axle by applying a bit of brake pressure on that corner.”

The sheer range of the car’s dynamic dexterity is clearly extraordinary, but it’s reassuring to note that, taking its design cues from the Velar, it’s in a completely different class to the model it replaces.