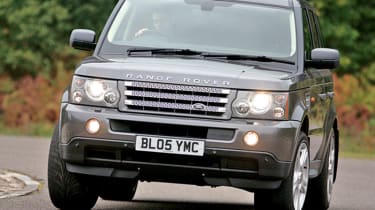 JE Engineering has a rich heritage of working with Land Rover and Range Rover models. But in the Range Rover Sport, it has created one of its wildest cars yet. Dramatic to drive and amazing to listen to, its appeal is limited by its cost and the risk associated with invalidating its warranty. However, few 4x4s are so intoxicating.

It's not the wheels that give away the JE Engineering-tuned Range Rover Sport’s new-found performance, but the engine note. Even at idle, the stainless steel exhaust is thunderstorm loud.

Based on the supercharged 4.2-litre machine, this Stage 1 tuning package offers an amazing 434bhp and 622Nm of torque. That means 0-60mph somewhere in the region of six seconds, while the top speed remains limited to 140mph. What’s more, the conversion looks impressive value for money, coming in at £4,559 fully fitted.

Despite the new wheels, the suspension remains standard, as does the interior. Even so, drivers should not underestimate the dramatic effect the performance upgrade has on the car’s character. The big 4x4’s in-gear acceleration is much, much stronger.

Our only criticism is the effect it has on fuel economy. With the supercharger blowing harder than ever, you can forget about getting close to the standard car’s 18mpg. Still, if you are happy tuning the engine of a £60,000-plus SUV, increased fuel bills won’t be a concern!

Log on to www.autoexpress.co.uk to see the 4x4 in a high-speed track test.