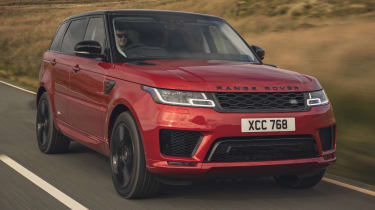 Creaking infotainment aside, this Range Rover Sport feels rejuvenated by its all-new diesel engine. It has bags of punch and performance, is refined and offers great long-distance cruising ability. But we wonder if the D300 might be an even more appealing proposition, given its considerably lower price tag.

The Range Rover Sport is now more than seven years old - so logic would suggest that a new generation can’t be far away. But in the meantime, Land Rover has treated its sporty luxury SUV to a fresh pair of diesel engines, accompanied by 48-volt mild-hybrid technology.

On the move, though, it’s the mid-range punch that really impresses. There’s enough shove off the line, of course, but that 700Nm is on tap between 1,500rpm and 3,000rpm, and the eight-speed automatic gearbox is well tuned to put it to good use. You’ll soon find yourself enjoying the wave of torque to catapult you out of corners - and overtaking is easily accomplished.

The engine note is perhaps a little more generic than the old TDV8’s, but in general it strikes a good balance between polite refinement as you’re cruising along (60mph requires barely 1,200rpm) and a gruffly growl as you push on.

Dynamically, the Range Rover Sport retains its distinct character - one which sets it apart from the full-fat Rangie and prompts remarkably little crossover between the two cars’ customer bases. The lighter diesel engine helps the Sport to feel more lithe than ever - freakishly so, you could say, for a car which is 4.9 metres long and still weighs almost 2.3 tonnes. 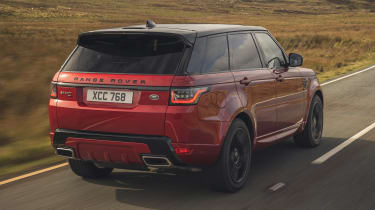 The steering is a little lighter than you’d expect, but it’s accurate and crisp, and the body control is beautifully judged, allowing the Sport to mask its size and height on twistier roads. The ride isn’t flawless but you’ll be untroubled over the majority of surfaces and you can always firm things up with the car’s Adaptive Dynamics if you want to sacrifice a little comfort for even better poise.

Inside, the Sport’s slightly tighter cabin continues to feel more snug than the Range Rover’s, but there’s still plenty of space for four grown-ups to travel in real comfort. The materials, including HST’s standard Windsor leather, are generally high in quality. But it’s frustrating that the car sticks with JLR’s ageing Touch Pro Duo infotainment system, instead of the new Pivi Pro that’s fitted to the likes of the Defender and Evoque.

It’s worth noting, too, that the D350 is only available in HST trim, and it’s a five-seater; if you want even the option of adding a third row, you’ll need to look to the D300, which is offered across the wider range.

In fact, we’d be keen to see how that more modest engine stacks up, because for all the D350’s performance - and there’s plenty of it - that restriction to HST trim means lots of kit but a list price of almost £86,000. The D300 doesn’t exactly look short on torque and pace itself, but its prices start at almost 20 grand less.