The LDV EV80 offers zero emissions and a one-tonne payload, but at a cost 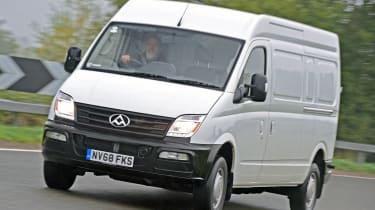 If you need a large electric van sooner rather than later, then the LDV EV80 is one choice for sale in the UK today. It's on the market at the same time as the Renault Master Z.E., but both are available ahead of similar models such as the VW e-Crafter and Mercedes eSprinter, which are a little while away.

List prices for the LDV EV80 start at around £60,000, but add the Government's Plug-in Van Grant, and this drops nearer to £50k. That's still a lot more than electric vans such as the Renault Kangoo Z.E. and Nissan e-NV200, but these are two classes smaller and can't match the EV80 for cargo volume or payload weight. As already mentioned, the only other off-the-shelf large electric van currently for sale is the Renault Master Z.E, but this costs even more than the EV80. In addition, its battery range isn't quite as long as the EV80's, and it's only available as a panel van - LDV offers van, chassis cab, luton and even minibus versions of the EV80.

If the LDV EV80 looks familiar, that's because it can trace its roots to the UK-built LDV Maxus from the early 2000s. It was re-introduced to the UK a few years later as the V80, with power coming from a VM Motori diesel engine. The EV80 takes the V80 and swaps out the diesel running gear for an electric motor and battery pack.

This set-up comprises a 123bhp electric motor and 56kW lithium-ion battery. As with all electric vans, there's a single-speed automatic gearbox, so overall the EV80 is easier to drive than the V80 on which it's based. The 56kW battery is good for a claimed range of up to 119 miles, although of course this will vary according to your payload weight and the ambient temperature.

Because the EV80 carries its battery under the load area, cargo volume is identical to the V80 diesel. The panel van version comes in mid and high-roof variants on a long-wheelbase chassis, so that cargo volume measures in at 10.4 or 11.6 cubic metres, while maximum payloads weigh in at 950kg and 910kg respectively.

LDV quotes a battery range of up to 119 miles for the mid-height panel van (it's 113 miles for the high-roof version), and a full charge of the lithium-ion battery gives you about that much range on the trip computer. In our time with a mid-height van, which was driven in mid- to low-teen temperatures and unladen, we found this was about as far as you could travel on a charge. As mentioned, higher speeds on dual carriageways will knock this down, but if the EV80 is used in an urban environment, then operators can expect to cover this distance when starting with a full battery. 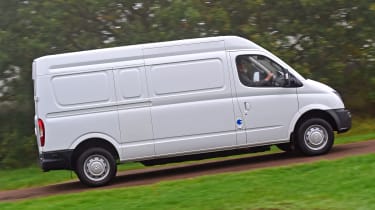 Charging is done via a standard CCS socket, which is located on the driver's side where the fuel filler is positioned on the diesel van. The van has a symbol on the dashboard that confirms it's charging, but there aren't any hi-tech displays to show how energy is being replenished or used - you just get an 8-bar 'fuel gauge' and a display showing energy use as you use the accelerator and brakes.

There are no rapid-charge options, with the fastest charge rate being 30kWh. That can charge the battery from flat to full in an hour and a half, while a charge from a domestic supply takes seven hours. The EV80 currently doesn't come with the option of pre-heating or cooling of the cab, although the system is quite quick to get up to temperature.

Prices for the LDV EV80 start at around £54,000 when you include the Government's Plug-in Van Grant, which is around £10,000 less than you'll pay for a Renault Master Z.E. There are cheaper options in the form of the Renault Kangoo Z.E. and Nissan e-NV200, but these two have smaller cargo volumes and payload weights.

Another advantage the EV80 has is the ability to choose a chassis cab version, while LDV also offers Luton and Minibus variants, although these are pricier than the standard van.

Get over the initial purchase price, and the EV80 will reap benefits in terms of everyday running costs and tax. An overnight charge will cost a few pounds when compared to a £50+ fill of a diesel van, while company van tax is zero if you use the van solely for business use. As of 2019, electric vans pay the same rate of company van tax as diesel ones if they are also used privately.

As well as low everyday running costs, all LDV models, including the EV80, come with a five-year, 125,000-mile warranty.

The EV80 comes in two panel van variants. They are both long-wheelbase models, but you have the choice of either mid or high-roof configurations. Both vans have a wheelbase of 3,850mm, the majority of which is given over to cargo space. There are multiple lashing eyes set into the floor, and the double rear doors can open out to 270 degrees, where they are held in place to the side of the van by magnets. There's a single sliding door on the nearside, while a grab handle aids access to the load area. This is needed because the load floor is comparatively high when compared to rivals. 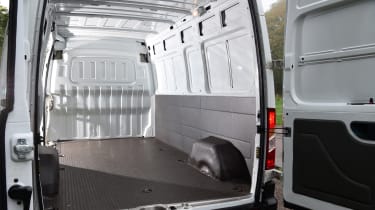 Go for the mid-height van, and there's a load area of 10.4 cubic metres and a maximum payload of 950kg on offer, although if you get close to this weight you can expect the EV80's battery range to take a hit. Go for the high-roof model, and cargo volume increases to 11.6 cubic metres, but the extra metal of the bodywork has an impact on payload, which is 910kg on this model.

In the cab, both EV80s feature overhead storage, deep door bins and a glovebox, while there are trays on top of the dashboard, although overall quality is a disappointment.

The LDV EV80 can trace its history back to the LDV Maxus, a van that went off sale in the UK in 2006. This means the basic structure of the EV80 is 20 years old, and while that manifests itself with some poor quality in the cabin, the electric running gear is bang up-to-date. The electric motor and battery are the product of LDV's parent firm SAIC, and have been developed with the rigours of the Chinese market in mind.

• Electric car charging in the UK

The battery is held under the cargo floor in a steel cage, so it's well protected in the event of an accident. Even more important is the van's five-year 60,000-mile warranty, which covers the van and its running gear, although the diesel V80 gets a 125,000 mile cover over the same time period. You also get five years' roadside assistance for five years.

Safety features include stability control with brake force distribution and disc brakes all round, while the electric parking brake features hill-hold control. There are driver and passenger airbags and a trio of three-point seatbelts.

Start up the EV80, and you need to be a little patient as the system starts up. In the diesel V80, the starter motor cranks over and the diesel fires up with a noisy rattle quite quickly. But for the EV80, there's near-silence as the van comes to life after a few seconds. You get a few distant whirrs from the electrics, and finally there's a beep and a green 'READY' icon lights up on the centrally-mounted dashboard. If you turn on the ignition, then put your seatbelt on, then the van should be ready to drive away once you've buckled up. 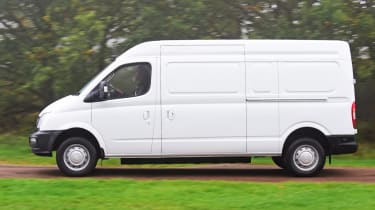 One addition the EV80 has over the V80 - as well as the auto gearbox - is an electric parking brake. So all you need to do when driving away is put the van into Drive, press the accelerator, and the parking brake releases automatically. It also re-engages when you put the van into Park, a really useful feature for drivers on the kind of stop-start journeys the EV80 is designed for.

As with many other electric vans, the EV80 offers sprightly acceleration off the line, so much so that it'll surprise plenty of other vehicles at the lights, especially when the van is unladen. Initial acceleration is good up to around 40mph, but then it tails off the faster you go, and stops completely at 62mph, when the electronic speed limiter cuts in, although this isn't abrupt.

In fact, the speed limiter is a useful tool, because it means you can keep the throttle to the floor on the motorway, but the electric motor is still barely ticking over - as shown by the energy meter in the dials. However, the motorway isn't the place the EV80 is designed for, because it's quite noisy courtesy of the lack of sound deadening that lets in plenty of wind and road noise. High-speed driving also kills the battery range. 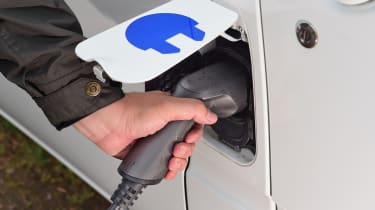 The LDV EV80 is at its best around town, where the flow of stop-start traffic means you'll be able to match the van's estimated range, as long as the weather's temperate. But while our test van was quiet and kept up with traffic well, there was a roughness to the throttle when using it lightly. Move from a light press to lifting off, and there's a jerkiness in the drivetrain that isn't present in any other electric car or van we've tried.

There's a fixed level of energy recovery from the electric motor, and while it's possible to recoup some energy when coasting, the van's weight means there's only a modest amount replenished. However, to offset this, we found that using the vans' heater or air-conditioning didn't have a negative impact on battery range. On many other EVs, you'll see the battery range drop by a few miles as soon as you turn the air-con on, but this isn't the case in the EV80.

Overall the EV80 is a reasonable van to drive. The long-wheelbase means that while the front suspension can thump into potholes, you're isolated from a second-round from the rear suspension. The set-up is on the firm side, but it's no less comfortable than rivals.

While the LDV EV80 drives much like any rival electric van - and is a lot better than the diesel V80 - it falls behind somewhat in terms of cabin quality. There are lots of hard plastics and a mish-mash of materials used, most of which feel brittle and low-rent. Some switchgear can clearly trace its roots to the LDV Maxus that disappeared in 2006 - a van that wasn't even a front-runner back then - although the new auto gear selector and parking brake lever are clearly taken from more modern vehicles in the range of LDV owner SAIC, as they seem to be of a better quality, if still not on a par with rivals. 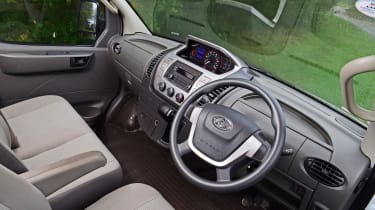 The instrument binnacle is mounted centrally on the dashboard, so the main dials aren't straight ahead of you, and while the central speedo is clear to read and is flanked by the other read-outs and lights, it all looks a bit dated. One major plus point is that the latest EV80s now come with a 10-inch touchscreen infotainment system with Apple CarPlay included, which gives the cabin a much-needed technology boost.

The three-seater cabin is spacious, and there's a good view out, courtesy of the huge windows and wide-angle door mirrors (which are heated), while standard-fit rear parking sensors help to take the guesswork out of reversing this 5.7-metre long van. You can also add a rear camera for added peace of mind. 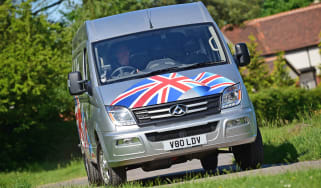 LDV is back in the UK with its V80 large van, a model which offers big-van space for the price of a compact model
Skip to HeaderSkip to Content