The award-winning Mercedes Sprinter adds another string to its bow with the all-electric eSprinter. We try an early prototype... 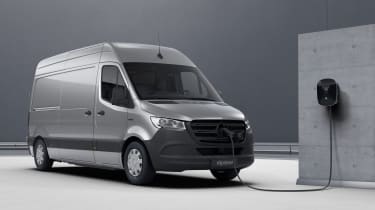 Like the eVito, the Mercedes eSprinter is a van built of necessity. It will be able to enter zero-emissions zones to maintain deliveries for last-mile and multi-drop courier companies as emissions rules around the world tighten in the coming years. This means the van has a ready-made and growing audience. Its appeal beyond these companies is limited due to the sub 100-mile range and its dulled performance, but it's a step in the right direction to give businesses an environmentally friendly choice when choosing a van to suit their needs.

It's fresh from winning the Best Van award at the 2018 Auto Express New Car Awards, but the Mercedes Sprinter Mk3 isn't resting on its laurels. Auto Express has been behind the wheel of a pre-production prototype of the all-electric eSprinter.

The new large van has already impressed us with its all-round abilities, but the addition of an all-electric Sprinter means Mercedes Vans is ready for future legislation as more big cities bring in restrictions on the kind of vehicles that can enter built-up areas. And the eSprinter has been fast-tracked into development, courtesy of the fact it uses the same running gear as the eVito mid-sized electric van.

That means there's a 113bhp electric motor replacing the diesel engine under the bonnet, while a battery pack is slung under the cargo area. This was obvious to see on the pre-production prototype we were driving, thanks to the exposed bright orange shielding for the live power leads and because it wasn't being protected by the 3mm steel plating that the eVito gets - this will be added once final production has been signed off. With our test route around a coned course in a large car park, it was hardly likely to damage the battery, especially as it's ringed by a tubular steel frame. 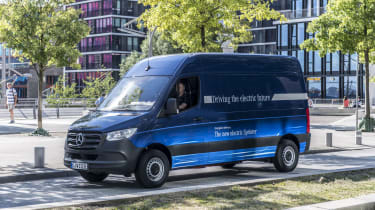 The eSprinter is based on the Sprinter's newly introduced front-wheel-drive chassis, and at the moment it's being developed in one panel van body style - more versions will be offered once production is in full swing.

With the same 41kWh battery as the eVito, the eSprinter has a useable range of 71 miles. However, the extra length that the Sprinter platform has over the eVito means a larger battery pack can be fitted. And with a 55kWh battery in place, the eSprinter's range matches the eVito at 93 miles. Mercedes's research has found that this should be enough for any last-mile delivery companies to do a day's work in a zero emissions city centre.

The only downside to the larger battery is a reduced payload that comes in just under one tonne (the 41kWh version can still carry just over a tonne), although the couriers this van is aimed at are unlikely to ever need to use its maximum capacity, and there's still a healthy 10.5 cubic metres of load volume to play with.

Like the eVito, the eSprinter will come with a full set of driving modes designed to favour economy over performance. This pre-production version didn't feature the system, but it did come with an energy recuperation set-up that helps reduce energy consumption via simulated engine braking.

There are four modes (D++, D+, D and D-), with the minus setting offering maximum resistance and enabling drivers to engage in one-pedal driving, where you only need to apply the brakes when you're at a stop. At the other extreme, D++ is the equivalent of freewheeling in neutral in a conventional combustion engined van. 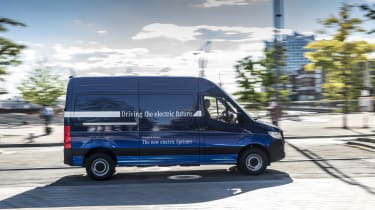 Our brief drive revealed that the eSprinter isn't quite as quick off the mark as the eVito thanks to its extra weight, but it's still a decent performer compared to a diesel with the same output thanks to the instant torque from zero revs. And the low-slung battery meant the eSprinter was agile for its size, too, with light steering that's easy enough to twirl from lock to lock.

The engine braking is a useful feature that will help boost battery range, so much so that we don't know whether the additional modes are ever likely to be used, especially as D- is the default mode when you turn the eSprinter on.

When it goes on sale, the eSprinter will take full advantage of the van's MBUX infotainment system and Mercedes PRO connectivity, and fleet managers will be able to monitor energy consumption and remaining range remotely, while also allowing users to plan ahead to ensure the van doesn't run out of energy before completing a job. When it comes to recharging, that larger battery will take eight hours to top up from flat, two hours longer than the standard eSprinter.