LDV is back in the UK with its V80 large van, a model which offers big-van space for the price of a compact model 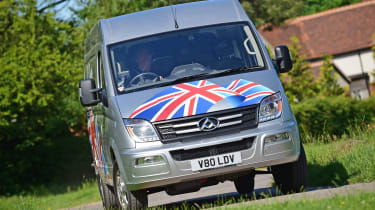 The LDV name can trace its ancestry back to the days of British Leyland, via Leyland DAF. Now the company is back in the UK with its V80 van. However, while past LDV models like the Pilot, Convoy and Maxus were built in the Midlands, the V80 is assembled in China by SAIC, the company that now owns LDV and MG.

If the V80 looks familiar - aside from the glaring similarities in its design to the previous-generation Ford Transit - that's because it's essentially a rebadged version of the LDV Maxus that was sold in the UK from 2005 until LDV went into administration in 2009.

The V80 is spearheading the relaunch of LDV in the UK, which will see a variety of commercial vehicles sold under the brand. The basic van range comprises three vehicles, with a short-wheelbase low-roof version offered along with the long wheelbase variant that comes in mid and high-roof guises. The smaller van has a maximum gross vehicle weight of 3.2 tonnes and the other two are 3.5 tonnes, while LDV also offers chassis cab, Luton van and 15-seat minibus variants.

Whichever model you choose, power comes from a 2.5-litre four-cylinder diesel from Italian firm VM Motori (it's the same engine you'll find in the TX4 taxi, plus a couple of older Jeep and Chrysler models). It makes 134bhp, and the engine is mated to a six-speed gearbox that sends drive to the front wheels. If you're after an alternative powerplant, LDV is planning on launching an all-electric EV80 van in the future.

Prices for the LDV V80 panel van range from £16,000 to £22,000, which is dirt cheap for such a large van - prices are in a similar ballpark to vans like the Citroen Berlingo and Peugeot Partner. LDV also offers competitive finance, as well as a five-year warranty and roadside assistance. 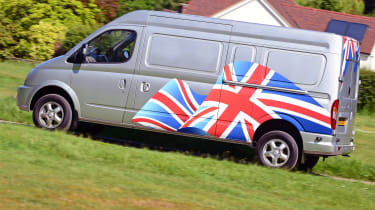 However, it's clear that you get what you pay for, because if you've driven any modern van, the LDV will feel cheap in comparison. The fit and finish inside is no better than it was when the Maxus was introduced in 2005, with ill-fitting switchgear, hard plastics and plenty of exposed metalwork and running gear throughout.

This poor quality translates into the drive, too, because while the V80 is quick enough, the diesel is noisy, there's plenty of wind and road noise at all speeds, and the suspension crashes over all kinds of bumps. If you can live with these issues, then the V80 offers a lot of van for the money, as no other model can come close to offering its kind of carrying capacity for the same price.

LDV quotes fuel consumption of 30mpg for the V80, but this is pretty poor in comparison to rivals such as the Ford Transit (around 40mpg) and Citroen Relay (over 45mpg). There's no fuel-saving tech such as stop-start, while emissions of 248g/km are nothing to write home about, either. It's a good job that all tax for vans is paid at a flat rate, as the high emissions could cancel out any price advantage the V80 has.

The big savings are made on the V80's list price, which are so low that you could just about bear the high running costs. The most expensive model in the panel van range still comes in at under £22,000, which is the price point where most rival vans of a similar size begin. The cheapest V80 is priced at around £16,500, which is the same as a mid-spec Citroen Berlingo.

Servicing might be an issue with the V80. There are around 30 LDV dealers across the UK, so there aren't as many franchises as some rivals, while the V80's service and maintenance book claims that the service intervals are every 15,000 miles. That's not particularly impressive when some rivals can go up to two years without needing to visit a dealer.

Concentrating on the panel van range, the LDV V80 comes in three flavours, a short-wheelbase low-roof, and a long-wheelbase version in mid and high-roof configurations. The latter two also gets a longer side door to boost access, although all models feature high ground clearance that sets the load floor relatively high. 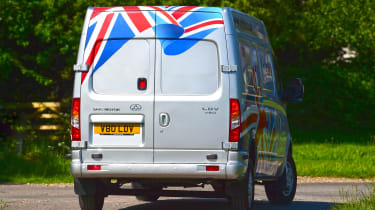 The rear doors are split 50:50, and while they can be locked open at 90 degrees, the only other setting is fully open, where magnets on the van sides hold the doors open. The exposed hinges give some clue to the V80's budget roots, although the wipe-clean floor and a plywood lining give the load area a tidier look. All the doors feature rather flimsy handles that don't feel particularly robust, while the sliding slide door doesn't lock open very easily, and also needs a big slam to shut properly.

The V80 features a window in the bulkhead so you can keep an eye on items in the back, but another gripe is that the doors to the passenger compartment don't have any stops so that you can leave them half or two-thirds open - it's either fully open or fully shut, and they can swing open if you're not careful.

The smallest V80 has a gross vehicle weight (GVW) of 3.2 tonnes, while the LWB versions have a 3.5 tonne GVW. That's on a par with similarly sized rivals, but a good tonne ahead of anything at a similar price. Load volumes are 6.4, 10.4 and 11.6 cubic metres respectively, which is competitive with the Ford Transit. The load area only has a small amount of wheelarch intrusion, courtesy of the V80's raised ride height, so it's easy to load items in without any obstruction. Once loaded, there are recessed lashing eyes in the floor for strapping items down.

As the V80 uses the same running gear as the LDV Maxus, it should benefit from the fact the mechanicals have been around for a long time, and should be reliable. The same goes for the VM Motori-sourced 2.5-litre diesel. This engine has been around in different models since around 2001, so should be reasonably reliable. And if things do go wrong, LDV offers a five-year warranty on the V80, which is backed up by breakdown recovery for the same amount of time.

Safety kit is pretty good, with electronic stability control fitted as standard, while anti-lock brakes with brake force distribution and brake assist are also included. There are driver and passenger airbags and side impact protection, too. Euro NCAP has yet to test the V80, but the van earned a four-star rating in the Chinese NCAP equivalent.

While the LDV V80 has decent load carrying ability and offers amazing value, there's no avoiding the fact it feels like an old van to drive. The oily parts underneath are sourced from the LDV Maxus, which was first introduced in 2005. The engine is just as old, albeit from a different source, and while it delivers decent power, the amount of noise it makes means it feels like it's in the passenger compartment with you.

There's not as much sound deadening as you'll find in more modern rivals, and with a familiar diesel rattle even at idle, you're fully aware that you're driving a commercial vehicle as soon as you fire the motor up. Use any throttle, and you'll get an even louder rattle and it doesn't let up until you get to the 4,000rpm rev limit.

You won't be troubling the limiter, though, because the 2.5-litre diesel's narrow power band means it runs out of puff quite early. It makes its maximum 330Nm of torque between 1,800-2,600rpm, and it's clear that the six-speed gearbox has been set-up to make the most of the limited power on offer. While first, second and third are reasonably spaced, and the shift is reasonably good, fourth and fifth seem quite close together, while sixth could do with being a bit longer to boost motorway refinement.

At 70mph the engine revs at about 2,600rpm, and thanks to the lack of soundproofing, there's lots of diesel noise and you can hear the turbocharger spooling up every time you touch the throttle. It's not just engine noise that spoils motorway refinement, as there's plenty of wind noise around the wing mirrors and door openings, while road noise makes its way into the cabin, too. It's not so harsh at lower speeds, because you can use the higher gears to keep the revs low and still have some power on tap. 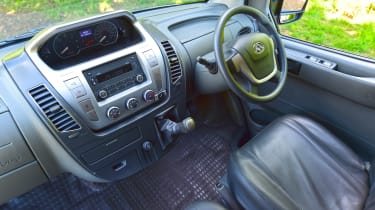 The suspension is designed with load carrying in mind, but even by van standards it's pretty bouncy. Big thumps can be felt in the cabin, and the leaf springs at the rear are especially prone to being unsettled.

The steering is reasonably responsive, although there do seem to be more turns from lock-to-lock than in other vans, while LDV has seen fit to kit the V80 out with disc brakes all round. However, the brakes on the model we tried were squeaky and felt pretty wooden, and they needed a lot of pressure to bring the van to a halt. At least ABS with EBD is fitted as standard to boost stopping ability.

The LDV V80 is cheap, and it certainly shows in the cabin. The layout looks modern, but having the instrument binnacle in a centrally mounted pod means the dials are positioned a distance away from the driver, so you have to turn your head away from the road to check your speed. And the pod itself doesn't look very appealing, because the dials are ordinary and there's a dated digital clock and odometer with trip meter included - there's no extra trip information here.

The centre console is logically laid out and features big, user-friendly buttons, but the fit of the buttons in the dash was inconsistent, with differing gaps between them. The audio system features FM and AM, while USB and headphone sockets are included. The main wing mirrors are electrically adjustable via a small switch on the driver's door by the A-pillar, and they're heated, too. The seat adjusters for the driver's seat feel flimsy, and the seat movement was rather loose and difficult to fine tune. Still, you sit high and the vast windscreen gives a clear view ahead, and the mirrors are large with manually adjustable secondary mirrors below them.

Passenger space is good, as there's enough room to sit three abreast in comfort in the cab. The two passengers sit on a fixed bench, and there's room underneath to store items, while the high-roof model features overhead storage trays, although they aren't the biggest we've seen. You also get a twin cup-holder, ashtray and 12v socket a reasonably sized glovebox, deep door bins and a couple of shallow dashtop trays either side of the instruments.

Our car did feature some useful aftermarket additions in the shape of TomTom sat-nav, a Parrot Bluetooth phone connection and a forward facing camera for recording video clips, but overall the V80 feels years behind the opposition in terms of fit, finish and build quality. Although again, at this price you could easily forgive the V80's budget feel. 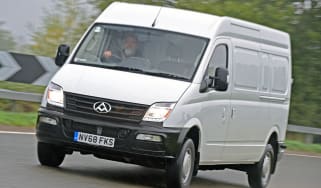 The LDV EV80 offers zero emissions and a one-tonne payload, but at a cost
Skip to HeaderSkip to Content