At last, white-hot supercar has been unleashed – and we hit the road to see if it’s been worth the wait. 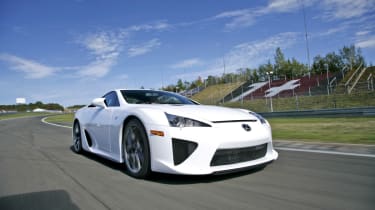 The first-ever supercar from Lexus is certainly wild enough to qualify for the top of the class. It’s beautifully made, blisteringly quick and completely impractical. Plus, the company will lose a fortune on every example it sells. It’s the timing of the launch, and that £375,000 price tag, which some might have problems with. The LF-A will go down in history as the car with the right stuff, but will it have enough customers?

We’ve seen the spy shots, got up close to the concepts, and watched prototypes testing and racing at Germany’s Nürburgring.

It’s taken 10 long years for Lexus to make good on its promise to launch the LF-A supercar. Now, finally, it’s here. Has it been worth the wait?

The answer is far from simple. We live in a different world to the one in which the Lexus grew up. Instead of a burgeoning class of super-rich customers, there’s a global recession. On top of that, we’ve seen a move towards a new environmental consciousness – one that’s less hungry for 552bhp, 202mph supercars in the mould of the LF-A.

So it should be no surprise that Lexus is limiting production to 500 examples, and has upped the exclusivity ratio with an asking price of £375,000.

But what’s most impressive is the design itself. At first glance, the car is stunning.

The LF-A shares only a handful of components with other Lexus models – and it shows. Its carbon fibre structure and coachwork is state-of-the-art in race cars, and its unique wishbone front and multi-link rear suspension hangs off aluminium subframes. Inside, the cabin is exquisitely finished and designed around a mix of modern and retro style.

Leather-covered bucket seats have electronic adjustment and are comfortable and supportive. With a high-mounted dash, the view out is restricted, and you have no idea where the corners of the car are. It’s just as well there’s a reversing camera built into the tailgate.

Luggage space is absurdly limited, with tiny cubbyholes round the seats and a boot under the rear windscreen, big enough only for an airline case.

The front-mounted 4.8-litre V10 engine is a masterpiece in expensive materials, with forged pistons, titanium connecting rods and cylinder head valves. Race bred, rare and hugely charismatic, the unit defines the LF-A more than any other component. Spark it up and it doesn’t even sound like a normal engine – it hums like an industrial air conditioner.

The Lexus revs from idle to its 9,000rpm red line in six-tenths-of-a-second, so you can blip the throttle as you would a motorcycle’s, and the specially tuned triple exhaust pipes sound incredible.

Flip the gearlever paddle behind the steering wheel and the car rumbles away. You need to take care not to jig up and down on the throttle while manoeuvring – the V10 reacts so quickly that it will spin the rear tyres.

The six-speed robotised manual gearbox is hardly groundbreaking, but there are few complaints about its performance on the track or when going hard. There are four basic modes: – Normal, Sport, Wet and Auto. Plus, an adjustable shift speed function will see ratios changed in two-tenths-of-a-second – if you don’t mind the hammering that will give the driveline.

Problems arise at low speeds, when the robotised clutch slips and bangs around. Shifting from reverse to first gears involves going through neutral in each direction, so manoeuvring into a parking bay can be a long-winded affair.

But then this Lexus wasn’t built for a car park. Open it up round the Nürburgring grand prix track and you begin to realise exactly how amazing it is. At 1.5 tonnes, it’s not light, but it feels like a featherweight around the tight turns and majestic swoops of the circuit.

That superb engine crowns the experience – change gear at 9,000rpm or 5,000rpm and the soundtrack is just as good. And while the pulling power at low revs doesn’t match that of a V8, the LF-A is so much more than a buzz box. Performance is incredible, as it should be for a supercar. The acceleration throws you into the seat, part thrilled to the bone, part horrified.

On the German track’s long straight, we saw the speedo nudging 170mph with the engine wailing like a chainsaw jacked up on super unleaded. It’s one hell of a ride!

Rival: Nissan GT-R Is it fair to compare this £60,000 mega Nissan with the Lexus? Both seek to redefine japanese supercar engineering in different ways. Yet whle the Gt-R isnt as special as the LF-A. it's much cheaper - and nearly as competent.